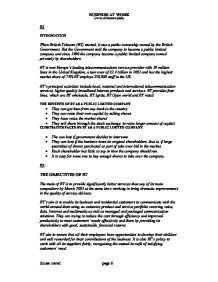 E1 INTRODUCTION When British Telecom (BT) started, it was a public ownership owned by the British Government. But the Government sold the company to become a public limited company and since 1996 the company became a public limited company owned privately by shareholders. BT is now Europe's leading telecommunications service provider with 29 million lines in the United Kingdom, a turn over of �2.4 billion in 2002 and has the highest market share of 73% BT employs 250,000 staff in the UK. BT's principal activities include local, national and international telecommunication services, higher quality broadband Internet products and services. BT provides four lines, which are BT wholesale, BT Ignite, BT Open world and BT retail. THE BENEFITS OF BT AS A PUBLIC LIMITED COMPANY * They can get loan from any bank in the country * They can raise their own capital by selling shares * They have voice the market shares * They sell share through the stock exchange to raise larger amount of capital. CONSTRAINTS FACED BY BT AS A PUBLIC LIMITED COMPANY * The can lose if government decides to intervene * They can lose if the business loses its original shareholders, that is, if large quantities of shares purchased as part of take over bid in the market. * Each shareholder has little to say in how the company should run. ...read more.

The managers always set limit and ask the team to contribute to the making of decisions. And it is said that if all this is happening in an organisation then it is said to be democratic organisation. The Culture of BT In BT they have a deep -seated belief about how the way work should be organised and the way authority should be exercised, how staff are rewarded and controlled. They also have a strong belief about proper staff dress code, obedience and initiative. Employees go to work on time and they also have to respect each other. BT staff has something that is very different from all other workers. One of these cultures is that ideas come ultimately from individuals and that staffs are responsible, motivated and capable to govern themselves. BT employees see themselves as a team and try to consider the community first before making decision as well as putting the community before profit and are always trying to make a difference. They are always trying to keep the prestige up as Europe leading communication provider. E5 THE USE OF ICT FOR INTERNAL AND EXTERNAL COMMUNICATION OF THE BUSINESS: Communication can be defined as the way which data or on message is passed from sender to the receiver with a feedback from the receiver. BT as a business organisation needs to communicate with suppliers, employees, customers and competitors as well within the organisation. ...read more.

The tasks are clearly defined with a clear chain of command and position power is the major source. Individual departments are very strong, self- contained and guards their own power and roles are precisely defined using clear job descriptions and definitions of authority. With this structure and culture BT's objective, providing better service to customers and achieving its profits target and market share can be achieved. C3 Information and communication technologies (ICT), a term used to describe the coming together of computer technology and telecommunications technology has revolutionised the information system in BT. Computers are central to ICT it is central to the success of BT. In terms of internal communication, computer are networked to provide services like intranet, electronic bulleting boards that enable employees to communicate by sitting behind their computers. In terms of external communication, computers are connected to the Internet providing email facilities, online services as well as information to public. How ever there are some general advantage of ICT in terms of communication in BT and this include higher information quality communicated that is more accurate, more detailed and more readily available information, Leading to better decision- making. Money savings in the time taken and costs involved in the use of electronic correspondence more than the traditional paper correspondence for internal communication. It also leads to data sharing across the organisation's boundaries such as the use of databases thereby improving communication BUSINESS AT WORK AVCE- BUSINESS (2003) Junisa marah page 6 ...read more.