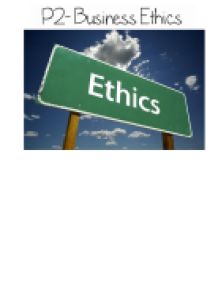 ﻿________________ P2 When a business operates ethically, it gets a lot of different advantages. This includes a good reputation, happier workers who are more motivated to work, and are proud to work at the company, who are also more likely to stay at the business. BP makes sure that they work ethically, giving their employees better pay then other big name companies. This will make the employees work better, and have a larger productivity rate. They also are more likely to stay at BP, which saves BP a lot of time and money in the long run. Developing nations By putting their oil rigs in developing nations, it gives the locals there a chance to develop and come out of poverty. By putting money into the local community and into building school, it gives the children there, the chance to be educated and have more of a chance to get a job. They also give jobs to the parents, which then gives them a good way of live, which everybody deserves. This will make everybody happy. Aswell as this, BP don?t do child labour like other big name businesses, which shows that they are an ethically run business. ...read more.

1. Competition- If the competition see that the business is getting more money than them, they?ll have to be more competitive to try and stop them going bust. The competition is BP?s biggest threat to the business and always has to keep in mind what they could do to the business if BP makes changes. For example, if BP decided to put prices up, the competition could damage the business by lowering their prices so that BP?s customers then go to them for their petrol. This means that BP not only has to keep an eye on their own business but also other businesses too. Also, if the competition decided to start a price-war, BP would be the first to know and how to react to it. 1. Customers- because they?ll be happier knowing that the business?s workers are being treated properly. The consumer will also have peace of mind knowing that the product is made to a higher quality and also not produced unethically (e.g. by child labour or in sweatshop conditions). Customers are also the people that are affected by BP?s changes the most. If BP decides to raise the prices of its fuel, it means that the customer has to also make choices either or not to stay with BP and accept its price rises or go to another business that may be cheaper. ...read more.

By always advertising how ethical the business is and doing projects to back up this claim, BP make their reputation grow as a good business. By having a good reputation, BP won?t lose sales and their profits will grow year on year, depending on if they can keep their reputation at a respectable level and there isn?t any scandals or conflicts becoming public into the press. Also, if BP?s profits continue to grow, it gives them more money to invest into the local communities, which will continue to show how ethical BP has become since the child labour scandal. The logo In the past couple of years, BP have tried to change how they appear as a business and are trying to make the business look more ethical and also environmentally friendly. One of the changes that they have made is the changes of the logo. By changing the logo from a green and yellow shield (which represents their strength as a business), they have changed it into a green and yellow flower. This could represent the environment, but also how they have changed to make themselves appear friendlier towards the earth, as before they decided to make changes, they were damaging the environment around them. By having their logo looking like leaves, flowers and the sun, this gives the impression of a friendlier BP. ...read more.