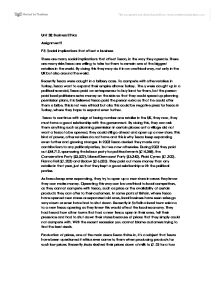 Unit 38: Business Ethics Assignment2 P3- Social implications that affect a business There are many social implications that affect Tesco, in the way they operate. There are many risks Tesco are willing to take for them to remain one of the biggest retailers in the world. By doing this they may do it in an unethical way, not only in the UK but also around the world. Recently Tesco were caught in a bribery case. To compete with other retailers in Turkey, Tesco want to expand their empire all over Turkey. They were caught up in a political scandal, Tesco paid an entrepreneur to buy land for them, but the person paid local politicians extra money on the side so that they could speed up planning permission plans, it is believed Tesco paid the person extra so that he could offer them a bribe. This is not very ethical but also this could be negative press for Tesco in Turkey, where they hope to expand even further. Tesco to continue with reign of being number one retailer in the UK, they now, they must have a good relationship with the government. By doing this, they can ask them anything such as planning permission in certain places or if a village did not want a Tesco to be opened, they could still go ahead and open up a new store. This kind of power, other retailers do not have and this is why Tesco keep expanding even further and growing stronger. In 2003 Tesco denied they made any contributions to any political parties, but we now otherwise. During 2003 they paid out �44,713, sponsoring the labour party for political events (�14,368), the Conservative Party (�5,502), Liberal Democrat Party (�6,340), Plaid Cymru (�1,300), Fianna Fail (�1,203) and Usdaw (�16,000). They paid out more money than any retailer in that year, just so that they kept a good relationship with the political parties. ...read more.

These staff members weren't just new employees but some had been working there for 30 years. They were asked to sign new contracts otherwise they would be made redundant; this is very unfair of Tesco to treat their loyal staff like this, and just shows how much they care of their staff. They should not change the contracts of these employees but reward them for their loyalty. It's not only Tesco who have some under fire for treating their staff unfairly but the government have also been blasted over pay claims. The recent austerity measures will cause a huge affect upon the public sector. As usual the people in higher positions will not be affected but the people at the bottom will be most affected. There will be a massive rise in job losses across the country, salaries and pensions will also be cut to some, this will be a huge disadvantage to some as they will be relying on the pension pay when they were supposed to retire. Environmentalist's main concern is thinking about the land that we live in, and how production and other aspects may affect this. By doing this, it will affect many, there are pros and cons. mainly the shopper will be the most happy with the environmentalists demands but the people who produce and sell to Tesco will feel their affect in a negative way. First they will see their costs go up and also it is very time consuming for them. Customers are then happy because the quality of the product is better and more time was put into it. An example is the fruit and vegetables Tesco sell in their stores. Environmentalist's put pressure on Tesco for them not to use pesticides on any of their products that they sell. But Tesco puts pressure on farmers to produce large quantities for low prices. This affects the farmers who provide fruit and vegetables to Tesco, as without it, it can be very difficult for them in producing this product. ...read more.

If Tesco are hoping to expand their European empire even further they should also comply with the EU rules. Recently Tesco were caught not providing vital information on toxic or carcinogenic substances in the products they were selling. So Tesco should provide all the information that is needed by the law, so that their customers now what substances are being used in the products they buy. Not only in the UK but also comply with EU rules regarding their rules to substance use. A company they could follow suite is The Body Shop, who only use environmentally friendly substances, and they have been rewarded the benefits of this as their company grows bigger and bigger. Tesco have done quite well in opening stores new store across the world including Asia. They have done all of these things ethically as by them opening stores only helps the community. It open new opportunities for local people as new jobs become available, they have the chance to climb the retail ladder and see themselves in high positions such as store manager. The one thing I don't like about Tesco and other retailers is the way they trade around the world. How they take advantage of vulnerable people from poor areas. Exploiting their needs and wants for their benefit to generate more sales. Even though this is very beneficial to Tesco's customers I don't think they know the extreme extent of how their clothes are being made. Now more than ever there is a huge spotlight on this matter and I don't think Tesco are doing enough. Like other retailers, Tesco were recently caught producing clothes for very cheap prices, they were employing children to produce them for very little pay. Instead they should work with the local community they are trading in and only employ people who are over 18, with a decent wage. Provide them with good working standards rather than a place where they work in filth. ...read more.