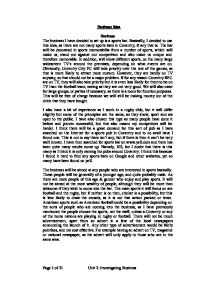 Business Idea Business The business I have decided to set up is a sports bar. Basically, I decided to use this idea, as there are not many sports bars in Coventry, if any that is. The bar will be decorated in sports memorabilia from a number of sports, which will make us, stand out against our competition and also make us unique and therefore memorable. In addition, will show different sports, on the many large widescreen TV's around the premises, depending on what events are on. Obviously, Coventry City FC will take priority over the rest of the games, as that is more likely to attract more custom. However, they are hardly on TV anyway, so that should not be a major problem. If for any reason Coventry RFC are on TV, they will also take priority but it is even less likely for them to be on TV than the football team, seeing as they are not very good. We will also cater for large groups, or parties if necessary, as there is a room for function purposes. This will be free of charge because we will still be making money out of the drink that they have bought. I also have a bit of experience as I work in a rugby club, but it will differ slightly but some of the principles are the same, as they show, sport and are open to the public. I have also chosen this type as many people have done it before and proven successful, but this also means my competitors will be harder. I think there will be a great demand for this sort of pub as I have searched on the Internet for a sports pub in Coventry and to no avail have I found one. This is not to say there isn't any, but if there is then it can't be very well known. I have then searched for sports bar on www.yell.com and there has been quite many results come up. ...read more.

The same goes for the people who said they will pay �1-�1.50. There will be special offers that I have previously mentioned where beers will be between �1.50 and �2 until the first goal/try is scored, this will be applicable to all football and rugby games. There were a minority willing to pay over �3 but most people will not spend that much on a beer and they will go elsewhere leading to a loss of revenue. Where do you live? This question doesn't really bare much relevance to my research as I have already decided on where the business will be situated. The one thing that this graph does show me though is that people from different areas might have varying opinions to those who live in others. So as you can see I have hardly asked anyone who lives in the Whitley area, so I could do two things about this, I could go around that area asking people their opinions, and do this for all the areas until I get a equal response, or ask people in town, where they live before they take the questionnaire. But that is not necessary really as I am quite satisfied with the results I have already gained. Do you smoke? This is quite an important question because of the smoking ban which is coming into effect on July 1, as this will affect the business quite a lot, I will go into this factor later on in this document. So this chart shows that I will have to buy a premises which has a garden, for those who do smoke to go outside in to smoke. Do you drive a vehicle? This doesn't really give me much information as most people if they were going for a drink or two will not bring their car with them. But there are those who are willing to take their car and leave it in the car park overnight and come back the next day to collect it. ...read more.

Legislations Consumer Legislation: This stops the business exploiting the customer by making false statements about products or misleading the customer about a product. This all falls in to the Trade Descriptions Act, 1968. Employment Legislation: Stops the business from exploiting the employees which stops in this case people from under 18 serving alcohol. The Employment Act, 2002 enforces this. Health And Safety Legislation: Protects employees by making sure that businesses offers health and safety training before they start the job. Health And Safety At Work Act 1974 Environmental Legislation: This legislation is going to be fairly easy to enforce as there is not many emissions going to be released by the pub, and with the smoking ban coming into place there will be even less than previous. Clean Air Act 1993 All businesses have to keep a record of all the transactions that they have done, which are used to produce accounts and graphs to show how the business is getting on. They also might be wanted but the Inland Revenue to calculate how much tax is owed. The records that might be kept are, invoices, injuries to staff or customers & damage reports. The building is also required to have insurance against things like fire, theft accidents to customers and employees and damages as well. I will not be able to include the insurance quotes for the business as I need to be able to verify that I legally own the building, which I do not so no company will quote me on this. SWOT In the next section I am going to use a form of analysis called SWOT which stands for strengths, weaknesses, opportunities & weaknesses. SWOT takes a more in-depth look at the business, and can also help to show if the business can succeed or not. The strengths and weaknesses are referring to internal, whereas the opportunities & weaknesses refer to external. ?? ?? ?? ?? Page 1 of 21 Unit 2: Investigating Business ...read more.