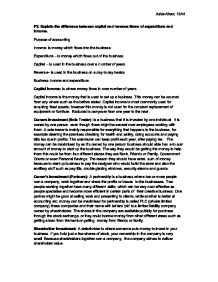 P2: Explain the difference between capital and revenue items of expenditure and income. Purpose of accounting Income- is money which flows into the business Expenditure - is money which flows out of the business Capital - is used in the business over a number of years Revenue- is used in the business on a day to day basics Business Income and expenditure: Capital Income: is where money flows in over number of years. Capital income is the money that is used to set up a business. This money can be sourced from any where such as the before stated. Capital income is most commonly used for acquiring fixed assets; however this money is not used for the constant replacement of equipment or furniture. Excluded is carryover from one year to the next. Owners Investment (Sole Trader): is a business that it is invested by one individual. It is owned by one person, even though there might be several over employees working with them. A sole trader is mainly responsible for everything that happens to the business, for example cleaning the premises checking for health and safety, doing accounts and paying bills tax due in profits. The sole trader can keep profit each year, after paying tax. The money can be maximised by as it's owned by one person business should able have to sum amount of money to start up the business. The way they would be getting the money to help them this could be from four different places they are Bank, Friends or Family, Government Grants or even Personal Savings. The reason they should have extra sum of money because to start up business to pay the designer who would build the store and also the ancillary stuff such as pay tills, double glazing windows, security alarms and guards. Owner's Investment (Partners): A partnership is a business where two or more people own a company, work together and share the profits or losses to the businesses. ...read more.

If they do want to budget their equipment they could get a different supplier who is cheaper to the current one. Land: Land a premise is for businesses would buy based on number of acres where they can build a building or property on top as it's their own land. As your buying the land it is quite expensive rather then buying just a property. As for example if you are buying near a rich or a wealthy area then your chances of paying of for it. It is known as a capital expenditure because the money your are paying for the land is for improvements as the payment for the land comes every month. Intangible Assets: these are the assets that cannot be touched physically as this is because its protected by the law such as: - Goodwill: this means when a business has done something good within the organisation for the environment for example if they are selling things which are recyclable. As businesses know that they have done good things and therefore they would want to sell the products then this could mean it's would sell and make profit because people purchase something that they know would benefit the environment. So whoever buys the goodwill would worth more then without the goodwill. - Copyright / Patents: this just have that because they do not want their ideas to be stolen or used from other businesses so they protect it by copyright. If their ideas does get stolen this would be illegal as they paid for their ideas to be protected and not to be used from any other businesses as they could get sued. - Trademark is a word, symbol, phrase or device which identifies a particular company or individual. There are many types of bottles used to contain soft drinks, for example, but only one with the distinctive logo and design of Coca-Cola. ...read more.

is leading to an disadvantage because for if they don't pay back the money this could lead to interest will be added on the total. It is best ideal ting to do when it's a new business to ask for a loan from the bank because this could lead bankrupt and loss a lot of money. Cash Purchase of Stock: Cash sales is when the business purchases and pays for their products to their suppliers. This is when business pays the money to their suppliers straight away. It is revenue expenditure as because it is money out of the business on a day to day basis so which means the money gets paid to their supplier quickly as possible. Credit Purchase of Stock: when a business purchases products from their suppliers, so they would still have the money on their account for another month after they have brought stocks from credit card. It is known as revenue expenditure because the money will be coming out of the business from a day to day basis yet it's going to take quite some time for the money to go through. Business may need to be careful on how they use their credit card even though money is still in the account they would have to make sure they don't spend anymore which they have to be careful they don't go overdraft which means they would be charge interest from their credit card. Well the difference between Capital income and Capital Expenditure is Capital income money which is coming towards the business which is paid directly where it can be used within number of years, where for Capital Expenditure the money is going out from the business throughout number of years. The difference between Revenue Income and Revenue Expenditure is that Revenue Income is coming through the business on a day to day basics and whereas Revenue Expenditure money is going out from the business through day to day basics. ?? ?? ?? ?? Aziza Khan; 13A4 ...read more.