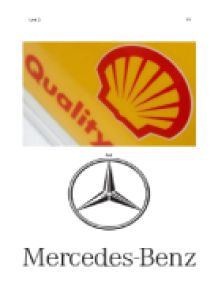 ﻿Unit 3 P1 And Introduction: Info about Shell Branding Building relationship Growing the company Info about Mercedes-Benz Branding Building relationship Growing the company Information about the Business: Shell -is a Dutch?British multinational oil and gas company headquartered in The Hague, Netherlands and with its registered office in London, United Kingdom. It is the world's second largest company by 2011 revenues and one of the six oil and gas "supermajors". Shell is also one of the world's most valuable companies. As of September 2012, its largest shareholder is BlackRock with 5% stake, while the Qatar Investment Authority has announced a plan to raise its stake from below 3% to 7%. Shell is vertically integrated and is active in every area of the oil and gas industry, including exploration and production, refining, distribution and marketing, petrochemicals, power generation and trading. It also has major renewable energy activities, including in biofuels, hydrogen, solar and wind power. It has operations in over 90 countries, produces around 3.1 million barrels of oil equivalent per day and has 44,000 service stations worldwide. Shell Oil Company, its subsidiary in the United States, is one of its largest businesses. Mercedes-Benz -is a multinational division of the German manufacturer Daimler AG, and the brand is used for luxury automobiles, buses, coaches, and trucks. ...read more.

Human ingenuity, innovation and technology hold the key to unlocking the energy our customers need to power their lives in the years ahead, while safeguarding the planet for future generations. We apply innovative thinking across our businesses and find new ways to meet our customer expectations while respecting people and the planet. Growing the company: Shell is growing quickly because they active in every area of the oil and gas industry, including exploration and production, refining, distribution and marketing. It also has major renewable energy activities, including in biofuels, hydrogen, solar and wind power. It has operations in over 90 countries, produces around 3.1 million barrels of oil equivalent per day and has 44,000 service stations worldwide. And by these they are providing good services and all the customers are coming back because they like the quality of fuel for which they are paying. Shell is growing because they use all type of diversification: Same Customers/Same Products They use this strategy because once customer use Shell?s product they will always buy it because they make first class products only and they are number one in this. Different Product/Same Customers They all the time is looking for new formulas of products which are more efficient and which customers will start to buy instead of old ones. ...read more.

At the end of the season, Mercedes-Benz sold its 40% stake in McLaren to the McLaren Group and bought 70% of the Brawn GP team jointly with an Abu Dubai based investment consortium. Brawn GP was renamed Mercedes GP for the 2010 season and is, from this season on, a works team for Mercedes-Benz. Mercedes is growing so quick because they make cars for all range of people e.g. sport, comfort and economy. Since 2002, Mercedes-Benz has developed the F-Cell fuel cell vehicle. The current version, based on the B-Class, has a 250 mile range and is available for lease, with volume production scheduled to begin in 2014. Mercedes has also announced the SLS AMG E-Cell, a fully electric version of the SLS sports car, with deliveries expected in 2013. In 2008, Mercedes-Benz announced that it would have a demonstration fleet of small electric cars in two to three years. Mercedes-Benz and Smart are preparing for the general uptake of electric vehicles (EVs) in the UK by beginning the installation of recharging points across their dealer networks. So far 20 Elektrobay recharging units, produced in the UK by Brighton-based Elektromotive, have been installed at seven locations as part of a pilot project, and further expansion of the initiative is planned later in 2010. Words: 1393 ...read more.