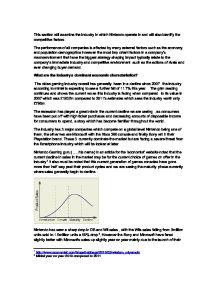 Business Strategy of Nintendo. This section will examine the industry in which Nintendo operate in and will also identify the competitive factors.

This section will examine the industry in which Nintendo operate in and will also identify the competitive factors. The performance of all companies is affected by many external factors such as the economy and population demographics however the most important factors in a company's macroenviroment that have the biggest strategy shaping impact typically relate to the company's immediate industry and competitive environment such as the actions of rivals and ever changing buyer demand. What are the industrys dominant economic characteristics? The video gaming industry overall has generally been in a decline since 2007 the industry according to mintel is expecting to see a further fall of 11.7% this year. The grim reading continues and shows the current woes this industry is facing when compared to its value in 2007 which was �1937m compared to 2011's estimates which sees the industry worth only �790m. The recession has played a great role in the current decline we are seeing, as consumers have been put off with high ticket purchases and decreasing amounts of disposable income for consumers to spend, a story which has become familiar throughout the world. The industry has 3 major companies which compete on a global level Nintendo being one of them, the other two are Microsoft with the Xbox 360 console and finally Sony with their Playstation brand. ...read more.

was only a 3% penetration in HD TV's in the market, however by 2016 it is expected that 100% of TV's sold will be HD.7 This has left Nintendo in a major disadvantage due to the lack of quality of their graphics as most consumers have powerful HD TV's but are left disappointed because of the inferior graphics of the Nintendo Wii. The impact this will have in the industry is that it will make it more competitive and will place Nintendo in line with Sony and Microsoft. The strategy devised by managers will have to analyse where the real payoff for this driving force will be they may find out the Nintendo may be able to attract more serious games publishers who make cutting edge games which are graphic focused. 2) Changes in who buys the product and who uses it. This Driving force in the industry can enable Nintendo, Microsoft and Sony to tap into additional markets in which traditionally they have not paid too much attention to. Market segmentation shows that between 2011 - 2016 retired population will have a 13% rise and families will also grow by 3.1%8. In regards to the retired market segment which is becoming continually more and more tech savvy this is an attractive area in which In particular Nintendo can expose due to their portable options of the '3ds' and user friendly Wii. ...read more.

Is an opportunity which deserves attention * Emerging markets such as China, India and Brazil provide an exciting opportunity as there are 100s of millions of potential users to get connected to the latest video games13 TECHNOLOGICAL * Ever Improving Technology means innovation will always remain at the forefront of the gaming industry * Developing Technology to reduce costs and errors in manufacturing process ENVIROMENTAL * Aiming to become a low carbon emission company can have positive effects in sales especially if new demographic segments are being sought. * Recycling of waste and components is essential * Making Packaging 100% recycling can influence consumers LEGAL * Health and Safety issues, Nintendo have had problems with the new 3DS giving users nausea and headache which could potentially cause isues for the manufacturers.14 Such as law suits. * Ensuring games comply with local culture, this is important especially if emerging markets are to be entered * Ensuring manufacturing process has been quality assured in order to comply with relevant laws. 1 http://www.economist.com/blogs/babbage/2010/03/wisdom_miyamoto 2 Mintel year on year 2010 compared to 2011 3 https://uhvpn.herts.ac.uk/sinatra/oxygen_academic/search_results/show&/display/id=545227/display/,DanaInfo=academic.mintel.com+id=596796#hit1 4 3ds sales usa 5 http://www.inentertainment.co.uk/20111112/studying-nintendo-3ds-sales/ 6 Gamble and Thompson page ... 7 http://finance.yahoo.com/news/HDTV-Penetration-in-Worldwide-prnews-2912451265.html 8 mintel 9 mintel 10 http://www.inentertainment.co.uk/20111112/studying-nintendo-3ds-sales/ 11 Find violent game criticised by government 12 13 http://www.businessweek.com/innovate/gamesinc/archives/emerging_markets/index.htmlv 14 Find 3ds health warning article ?? ?? ?? ?? ...read more.