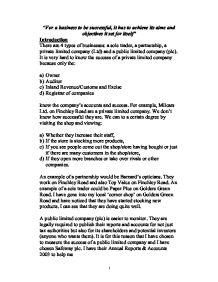 Business studies coursework - On the next page, there is a table of Safeways profit and loss accounts:

"For a business to be successful, it has to achieve its aims and objectives it set for itself" Introduction There are 4 types of businesses: a sole trader, a partnership, a private limited company (Ltd) and a public limited company (plc). It is very hard to know the success of a private limited company because only the: a) Owner b) Auditor c) Inland Revenue/Customs and Excise d) Registrar of companies know the company's accounts and success. For example, Milcars Ltd. on Finchley Road are a private limited company. We don't know how successful they are. We can to a certain degree by visiting the shop and viewing: a) Whether they increase their staff, b) If the store is stocking more products, c) If you see people come out the shop/store having bought or just if there are many customers in the shop/store, d) If they open more branches or take over rivals or other companies. An example of a partnership would be Barnard's opticians. They work on Finchley Road and also Top Value on Finchley Road. An example of a sole trader could be Paper Plus on Golders Green Road. I have gone into my local 'corner shop' on Golders Green Road and have noticed that they have started stocking new products. I can see that they are doing quite well. A public limited company (plc) is easier to monitor. They are legally required to publish their reports and accounts for not just tax authorities but also for its shareholders and potential investors (anyone who wants them). It is for this reason that I have chosen to measure the success of a public limited company and I have chosen Safeway plc. I have their Annual Reports & Accounts 2003 to help me The success of a business can be measured in many ways. I will be attempting to measure the success of Safeway in the following ways: 1. ...read more.