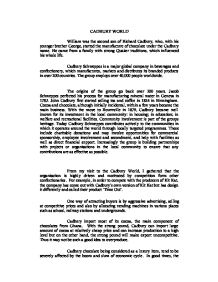 CADBURY WORLD William was the second son of Richard Cadbury, who, with his younger brother George, started the manufacture of chocolate under the Cadbury name. He came from a family with strong Quaker traditions, which influenced his whole life. Cadbury Schweppes is a major global company in beverages and confectionery, which manufactures, markets and distributes its branded products in over 200 countries. The group employs over 40,000 people worldwide. The origins of the group go back over 200 years. ...read more.

Community involvement is part of the groups heritage. Today Cadbury Schweppes contributes actively to the communities in which it operates around the world through locally targeted programmes. These include charitable donations and may involve opportunities for commercial sponsorship, employee involvement and secondment, and help with facilities as well as direct financial support. Increasingly the group is building partnerships with projects or organisations in the local community to ensure that any contributions are as effective as possible. From my visit to the Cadbury World, I gathered that the organisation is highly driven and motivated by competition form other confectionaries. ...read more.

Cadbury import most of its cocoa, the main component of chocolates from Ghana. With the strong pound, Cadbury can import large amount of cocoa at relatively cheap price and can increase production to a high level but on the other hand, the strong pound will make export uncompetitive. Thus it may not be such a good idea to overproduce. Cadbury chocolate being considered as a luxury item, tend to be severely affected by the boom and slum of economic cycle. In good times, the company may be able to sell huge amounts but in bad times or during recessions, sale can be expected to dwindle significantly. ...read more.