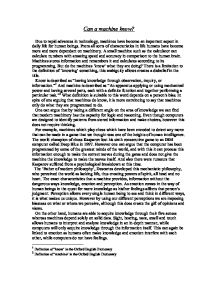 Can a machine know? Due to rapid advances in technology, machines have become an important aspect in daily life for human beings. From all sorts of characteristics in life humans have become more and more dependant on machinery. A small machine such as the calculator can calculate numbers with amazing speed and accuracy in comparison to the human brain. Machines stores information and remembers it and calculates according to its programming. But do the machines 'know' what they are doing? There is a limitation to the definition of 'knowing' something, this ambiguity allows creates a disbelief in the title. Know is described as "having knowledge through observation, inquiry, or information."1 And machine is described as "An apparatus applying or using mechanical power and having several parts, each with a definite function and together performing a particular task."2 What definition is suitable to this word depends on a person's bias. In spite of one arguing that machines do know, it is more convincing to say that machines only do what they are programmed to do. One can argue that by taking a different angle on the area of knowledge we can find that modern machinery has the capacity for logic and reasoning. ...read more.

However due to the huge evolution in computers and the creation of artificial intelligence, this statement could become true. Artificial intelligence is known as the "the study and design of intelligent agents where an intelligent agent is a system that perceives its environment and takes actions which maximizes its chances of success."3 Now this makes things interesting as AI technology can be used in machines and there are machines which perceive objects in its environment. For example, the iRobot Corporation developed the PackBot, a machine that has the ability to perceive things in its environment, it is now being tested and used by the U.S. military and NASA. AI philosophers still debate whether a man-made object can or cannot be conscious which includes the philosophy of mind. Some argue that true consciousness cannot be achieved by logistical systems, while others debate that functionalism is correct i.e. mental states such as beliefs, desires etc. are constituted only for their relations with other mental states. This shows how the human psyche can be linked to its creation of machines and how machines interpret things if they have a conscious. Moreover, this point raises the question of machines evolving more than humans due to human dependence on machines. ...read more.

Psychologists are already describing human beings as 'biological information processors.' Which raises the question; can human beings be considered machines? Computers come from a reductionist philosophy which sees everything as physical, chemical and electric processes where nothing has meaning. The way machine is defined could prove that the human anatomy is actually a machine which has various parts (organs) which work together along with mechanical power to make it function. In conclusion, the statement is mainly based on one's perception of the definition and functions of machines and knowledge. Machines can know, but they only know to a simpler level comparing to what humans know due to our different ways of knowing (Emotion, perception, reason and language). With the advancement in recent years of technology and artificial intelligence, machinery has become into objects of great intelligence which humans use for help in search of further knowledge. Even though machines do not have emotions, reason or perception with the increase in the intelligence of machinery it is no surprise if these ways of knowing will be a part of modern machinery in the near future. By Kunal Gokal Word Count - 1,244 1 Definition of 'know' in the Oxford English Dictionary 2 Definition of 'machine' in the Oxford English Dictionary 3 Definition of 'artificial intelligence' (or AI) courtesy of www.wikipedia.org ...read more.