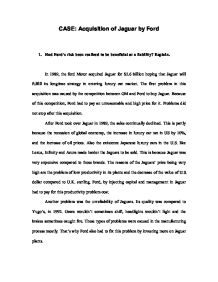 CASE: Acquisition of Jaguar by Ford 1. Had Ford's risk been realized to be beneficial or a liability? Explain. In 1989, the ford Motor acquired Jaguar for $2.6 billion hoping that Jaguar will fulfill its longtime strategy in entering luxury car market. The first problem in this acquisition was caused by the competition between GM and Ford to buy Jaguar. Because of this competition, Ford had to pay an unreasonable and high price for it. Problems did not stop after this acquisition. After Ford took over Jaguar in 1989, the sales continually declined. This is partly because the recession of global economy, the increase in luxury car tax in US by 10%, and the increase of oil prices. Also the existence Japanese luxury cars in the U.S. like Lexus, Infinity and Acura made harder the Jaguars to be sold. This is because Jaguar was very expensive compared to those brands. The reasons of the Jaguars' price being very high are the problem of low productivity in its plants and the decrease of the value of U.S. ...read more.

It has gone through a remarkable period of change, with X-Type, S-Type saloons and XK sports car range - reflecting on different customer needs and desires. Minimal gains have been visible in Europe. It has hold its "luxurious car" positioning in Europe, while trying to improve its "sports car" image. It has tried to put forward the Jaguar's image as the combination of both luxurious and sports car, but its recent withdrawal from Formula 1 races, has resulted in damage to its "sports car" image, following the great losses in the races. The withdrawal has had the biggest negative impact in European countries other than the United Kingdom, in which Formula 1 has represented the best marketing and promotion act of Jaguar cars. Therefore, nowadays, Jaguar's "luxurious image" is much more focused. In Britain, Jaguar's positioning is declining more and more, with respect to exchange rates and the large rivals in the car industry, as well as in the whole world. ...read more.

It should make its image in consumers' minds more exact. It should make a choice in delivering Jaguar as a luxurious car or as sports car. It should develop its strategies in one- way. If it chooses to focus on "sports car" image, then it should definitely enter the Formula 1 again. As a recommendation, we offer Ford to stop Jaguar production for a while. (Insipired from the Sunday Business article: Each Jag plant: at least one additional non-production week) As a team we think that Ford shouldn't rely only on the competition, when it will make an acquisition as it did in Jaguar case. If instead of Ford, GM would buy it; Ford could increase its competitive advantage while GM would deal with the expenses on Jaguar. The rationality shouldn't be lost in a competition and when an acquisition is needed, an intensive research should be made in order to prevent "expensive" mistakes. Ford also should be sure about its integration plans of the company that it acquires. This case shows us that a "famous" name isn't always the best investment to make, for the companies. ...read more.