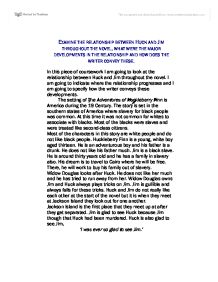 EXAMINE THE RELATIONSHIP BETWEEN HUCK AND JIM THROUGHOUT THE NOVEL, WHAT WERE THE MAJOR DEVELOPMENTS IN THE RELATIONSHIP AND HOW DOES THE WRITER CONVEY THESE. In this piece of coursework I am going to look at the relationship between Huck and Jim throughout the novel. I am going to indicate where the relationship progresses and I am going to specify how the writer conveys these developments. The setting of The Adventures of Huckleberry Finn is America during the 19 Century. The story is set in the southern states of America where slavery for black people was common. At this time it was not common for whites to associate with blacks. Most of the blacks were slaves and were treated like second-class citizens. Most of the characters in this story are white people and do not like black people. Huckleberry Finn is a young, white boy aged thirteen. He is an adventurous boy and his father is a drunk. He does not like his father much. Jim is a black slave. He is around thirty years old and he has a family in slavery also. His dream is to travel to Cairo where he will be free. There, he will work to buy his family out of slavery. ...read more.

'... for I warn't going to let Jim find out it was all my fault, not if I could help it.' This shows that Huck still does not treat Jim like a true friend even though Jim treats Huck like a friend. They travel downriver together for a couple of days. One foggy night it was too foggy to travel so they decided to tie up the skiff. When Huck jumped off the skiff he tied the rope to a twig. But the twig broke before Jim could get off. Jim drifted off downriver. Huck followed him in the canoe but he could not catch up with him. They were separated for a long time. Huck found Jim again but he was sleeping. He woke Jim up and decided to play a trick and to pretend to Jim that it was all a dream. Jim fell for it and he began to interpret the dream. 'Gone away? Why, what in the nation do you mean?' Huck then told Jim that it was not a dream and Jim would not believe him. But he proved it because of the debris on the boat. Jim did not like this very much, '... en wid de callin' for you, en went to sleep, my heart wuz mos' broke bekase you wuz los'...' ...read more.

He did not think much of Jim; he was just a slave and nothing more. During the story their relationship builds, right from the time that they meet on Jacksons Island. At this time Jim trusted Huck more than Huck trusted Jim. Jim trusted Huck because he had no one else and Huck was a rich and wealthy boy. Huck continued to play tricks on Jim throughout the story including the time that he put the snakeskin under Jims blanket and Jim got badly bitten. The worst trick that Huck played on Jim was pretending that Huck getting lost was a dream. Jim showed that he cared for Huck in the things that he said to him. When Jim found out that it was not a dream he was very upset. Huck was then forced to apologise to Jim for the wrong that he had done. This was a major stepping-stone, in the relationship between Jim and Huck, for equality between then. Until this point Jim respected Huck more then Huck respected Jim. At the end of the story Jim was freed from slavery. This is when Huck and Jim became equals because Jim was not a slave anymore. During their adventure they both realised that they needed each other. Jim realised before Huck did. At the end of the story they became good friends and treated each other with respect and cared for one another. ...read more.