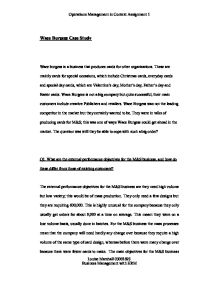 Wace Burgess Case Study Wace burgess is a business that produces cards for other organisations. These are mainly cards for special occasions, which include Christmas cards, everyday cards and special day cards, which are Valentine's day, Mother's day, Father's day and Easter cards. Wace Burgess is not a big company but quite successful, their main customers include creative Publishers and retailers. Wace Burgess was not the leading competitor in the market but they certainly wanted to be. They were in talks of producing cards for M&S; this was one of ways Wace Burgess could get ahead in the market. The question was will they be able to cope with such a big order? Q1. What are the external performance objectives for the M&S business, and how do these differ from those of existing customers? The external performance objectives for the M&S business are they need high volume but low variety; this would be of mass production. They only need a few designs but they are requiring 600,000. This is highly unusual for the company because they only usually get orders for about 8,000 at a time on average. This meant they were on a low volume basis, usually done in batches. For the M&S business the mass processes mean that the company will need hardly any change over because they require a high volume of the same type of card design, whereas before there were many change over because there were fewer cards to make. ...read more.

M&S do not require a low cost price for there product, this is because they are a massive retailer. All these objectives differ from those of existing customers because all existing customers require a low cost price because they are not well known and need a good priced product in order to make a profit. Q2. What are the risks and rewards of accepting the order from M&S? The risks of receiving the accepting the order from M&S are that if everything goes wrong or mistakes happen during process then M&S will not want to re order with Wace Burgess because there mistakes would have cost them money as well as time, this is also the case with Wace Burgess. Wace Burgess will lose out on money as well as time, but also the pressure on them to fulfil the order of M&S will have an impact on the employees as wee. They will feel so pressured that they may even want to quit there job or will have less motivation to go on, which will result in poor quality products. Rewards of accepting the order will be that higher margins will be obtained through more sales; also another reward would be that other retailers will be impressed with the cards which are produced and may want to do the same as M&S and order cards from Wace Burgess as well. ...read more.

then they will go ahead and process that order. This will mean that there will be nothing lying around and will need high communication but low inventory. Capacity planning will also be a good thing to introduce to the company, this will enable Wace Burgess to forecast sales, which is helpful to any organisation because this will enable them to specify a time period in which all orders will be process including the times, days and how long it will take. This helps managers plan ahead and decide whether or not they are able to complete all orders on time. They will then be able to develop capacity plans and set them against the performance objectives. Cards are usually produced when they are needed and when a special day comes up, this means that demand is higher on certain times of the year, to cope with this Wace Burgess will need to introduce chase demand, which will adjust capacity when demand increases or decreases. This will include hiring more employees when demand gets higher and letting people go when it slows down again, to make it easier Wace Burgess could hire sub contractors to come in on these higher demand times. Another way to handle high demand using chasing demand will be to introduce overtime to the employees as well as under time. This type of demand creates flexibility as it matches capacity with demand which changes throughout the year. Word Count: 1,796 ?? ?? ?? ?? Operations Management in Context Assignment 1 Louise Marshall 03001693 Business Management with HRM ...read more.

****
Most of the major points are raised in this essay. I would like the writer to have found out more about the business. Can their existing machinery cope with the increased order? What is their capacity? How much lead time would M&S give etc?