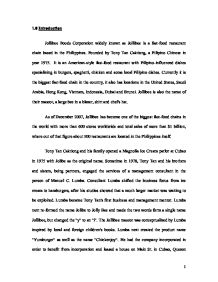 1.0 Introduction Jollibee Foods Corporation widely known as Jollibee is a fast-food restaurant chain based in the Philippines. Founded by Tony Tan Caktiong, a Filipino Chinese in year 1975. It is an American-style fast-food restaurant with Filipino-influenced dishes specializing in burgers, spaghetti, chicken and some local Filipino dishes. Currently it is the biggest fast-food chain in the country, it also has locations in the United States, Saudi Arabia, Hong Kong, Vietnam, Indonesia, Dubai and Brunei. Jollibee is also the name of their mascot, a large bee in a blazer, shirt and chef's hat. As of December 2007, Jollibee has become one of the biggest fast-food chains in the world with more than 600 stores worldwide and total sales of more than $1 billion, where out of that figure about 500 restaurants are located in the Philippines itself. Tony Tan Caktiong and his family opened a Magnolia Ice Cream parlor at Cubao in 1975 with Jolibe as the original name. Sometime in 1978, Tony Tan and his brothers and sisters, being partners, engaged the services of a management consultant in the person of Manuel C. Lumba. Consultant Lumba shifted the business focus from ice cream to hamburgers, after his studies showed that a much larger market was waiting to be exploited. ...read more.

With a revenue to net profit ratio of 2.5. In the 20th century, it had actually ventured into partnership in other countries such as Singapore, Taiwan, Indonesia, Saudi Arabia and Malaysia but failed due to lake of proper partnership arrangement. And as of current year, other than the Philippines, it operated in the United States, Brunei Darul Salam, Hong Kong and Vietnam. 4.0 Attempted Questions 4.1 What is the key success factors for Jollibee Food Corporation (JFC)? 4.1.1 Superior menu line-up. Basically the menus provided by Jollibees are quite similar to what is offered by McDonald. But the differences are, Jollibees offer noodles and rice meals to cater for Asians which is neglected by McDonald. On top of that, in term of pricing, for example, a comparison between a similar burger offered by Jollibee is US1.20 cheaper than the one in McDonald. 4.1.2 Creative marketing programs For Jollibee, the four strategic marketing tactic to increase sales are, firstly, they offer delivery services within certain areas around the restaurant, which is similar to what Pizza Huts had. This, has indirectly increase sales to cater for those who were not able to come to the restaurant, and the privilege of enjoying Jollibee's food in the comfort of their offices or houses and offer of convenience in the eyes of consumers. ...read more.

4.2.4 Growing concern and conscious on health food Fast food are generally considered as junk food by health concerned customers. They are said to be the main cause of over weighted children, and the cause of main sickness such as high blood, diabetes and others. Soft drinks are the major beverage served which is one of the major concern. Therefore, Jollibee should consider come out with healthier food which would cater to local needs internationally. 5.0 Question 3 What recommendation would you make to their senior marketing executives going forward? What should they be sure to do with their marketing? In view that since the early 1980, Jollibee was trying to expand its international business in many countries which include Singapore, Taiwan, Indonesia, Saudi Arabia and Malaysia but all ended up in failure. The was mainly due to unclear partnership agreement resulting in misunderstanding and partners taking advantage on Jollibee. Therefore, the following recommendation are given to Jollibee to assure the success in future. 5.1 To choose the right partner and right location to go global Jollibee should be careful in choosing partners. This is can be further enhanced by interviewing and having background check on prospect partners to ?? ?? ?? ?? 1 ...read more.