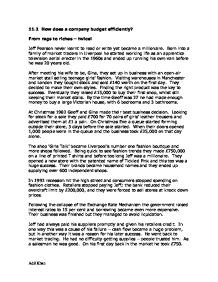 Case study on budget at a fashion retail business.

11.2 How does a company budget efficiently? From rags to riches - twice! Jeff Pearson never learnt to read or write yet became a millionaire. Born into a family of market traders in Liverpool he started working life as an apprentice television aerial erecter in the 1960s and ended up running his own van before he was 20 years old. After meeting his wife to be, Gina, they set up in business with an open-air market stall selling teenage girls' fashion. Visiting warehouses in Manchester and London they bought stock and sold �140 worth on the first day. They decided to make their own styles. Finding the right product was the key to success. Eventually they raised �15,000 to buy their first shop, whilst still keeping their market stalls. By the time Geoff was 27 he had made enough money to buy a large Victorian house, with 6 bedrooms and 3 bathrooms. At Christmas 1982 Geoff and Gina made their best business decision. Looking for stock for a sale they paid �700 for 70 pairs of girls' leather trousers and advertised them at �1 a pair. On Christmas Eve a queue started forming outside their store, 3 days before the sale started. When their doors opened 1,000 people were in the queue and the business took �25,000 on that day alone. ...read more.

In taking this risk, whilst at the same time paying suppliers immediately, Jeff runs the risk of having a cash flow problem. Not all retailers will pay within a month and this further exacerbates the cash flow problem, putting further strain on the upper end of the overdraft facility, and perhaps causing the bank to review the facility once more. A business that was profitable now runs the risk of becoming unprofitable as, if the overdraft limit is exceeded, the bank will start to charge much higher rates of interest. A vicious circle ensues which becomes difficult to escape. 3. Changing market conditions can be anything from macro-economic changes such as increases in the base rate of interest or increases in taxation, to micro changes such as an increase in competition or rises in the price of raw materials. The evidence cites the 1992 recession with consumers reigning in spending on fashion clothes. Interest rates rose to 15 per cent so that the cost of borrowing became ever more expensive. For Jeff the reduced overdraft limit together with the hike in interest rates would have slowed growth down enormously. His ability to obtain stock would have been curtailed as he would not have had the finance to pay suppliers immediately, and they would soon stop supplying at all. The squeeze on consumer spending further reduced the cash inflow until Jeff couldn't pay creditors and was forced into liquidation. ...read more.

Furthermore, having completed forecasting he is then in the position of comparing actual figures with the forecasts and then analysing the results. His forecasts will have been built on a combination of historical factors - he has been in business a number of years, and on what he can foresee ahead; growth in the economy, for example. Comparisons made (variance analysis) will enable him to gauge whether his business is doing well, and also allow him to re-adjust his future forecasts in light of the evidence available. Forecasting can be time consuming and expensive. For small traders it is another job to add to the list, and it doesn't always get done properly. Larger businesses, such as Jeff's will employ experts to carry out the research and should be able to make better judgements. Forecasting is not an exact science. Whereas Jeff's businesses were caught out in 1992 by recession, the ERM debacle and very high interest rates, many more businesses will have been damaged more recently by the banking crisis and inability to obtain loans, even at relatively low interest rates. On balance businesses should always try to plan ahead and sales forecasting is part of that preparation. Whilst forecasting cannot prevent unforeseeable events affecting business, it can plan more effectively for the future and be in a state of prepared readiness to deal with endogenous and exogenous shocks. ?? ?? ?? ?? Adil Khan ...read more.