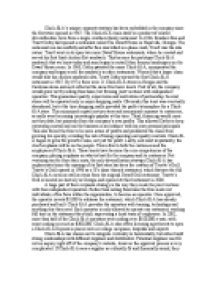 ﻿Chick-fil-A?s unique corporate strategy has been embedded in the company since the first store opened in 1967. The Chick-fil-A chain itself is a product of related diversification, born from a single, southern family restaurant. In 1946, founders Ben and Truett Cathy had opened a restaurant called The Dwarf House in Hapeville, Georgia. The restaurant ran successfully and after Ben was killed in a plane crash, Truett was the sole owner. Truett went on to open two more Dwarf House restaurants, where he created and served his first fried chicken filet sandwich. This became the prototype Chick-fil-A sandwich that we know today and soon began to outsell their famous hamburgers on the Dwarf House menu. In 1963, Cathy patented the name Chick-fil-A, incorporated the company and began to sell the sandwich to other restaurants. Worried that a larger chain would take his chicken sandwich idea, Truett Cathy opened the first Chick-fil-A restaurant in 1967. By 1974, there were 21 Chick-fil-A stores in Geogia and the Carolinas alone and each reflected the same four basic tenets. First of all, the company would grow not by selling franchises, but forming joint ventures with independent operators. This guarantees quality, supervision and motivation of partnership. Second, stores will be operated only in major shopping malls. Obviously this tenet was eventually abandoned, but at the time shopping malls provided the perfect atmosphere for a Chick-fil-A store. ...read more.

If Chick-fil-A sees a supplier as culturally fit and financially sound, they will do follow ups such as on site inspections, audits and sample runs. If and when a supplier is approved, they will have monthly meetings with the purchasing department and continue to be tested on product quality. Although Chick-fil-A does not own any of its suppliers, they retain high standards and tight control over their supply chain. Chick-fil-A has been working closely with their main distributor, MBM, since 2000. The NC based company has over 34 locations across the US, including a location in Macon, GA that was built in 2007 specifically to better serve one of its main clients, Chick-fil-A. MBM provides Chick-fil-A with order quantity software and uses the past four weeks average order quantity to predict the next week?s order. The operator can approve the quantity or increase/decrease as much as they deem necessary. These methods of inventory control help to cut cost and reduce waste, increasing profitability. The close proximity of Chick-fil-A stores to their distributors along with their inventory control methods are valuable resources to the chain. Although these resources are not rare, inimitable and there are possible substitutes for both, they add value to the chain and contribute to its success. Without the favorable locations of the distributors, Chick-fil-A would not be able to have favorable locations of their restaurants. ...read more.

During training, employees are instructed on how to provide excellent customer service. They are instructed to use phrases such as ?My pleasure? rather than ?You?re welcome? and ask ?May I refresh your beverage?? rather than ?Can I get you a refill??. Aside from having good manners, employees are reminded that this is still a quick service restaurant and that speed and efficiency are of the utmost importance. Every year Chick-fil-A spends $1 million evaluating its service, giving each location a two-page report detailing how its performance compares to the chain?s top performers. This close monitoring of employees not only measures performance but also builds a team environment to become one of the highest performing restaurants. Another important human aspect to consider is the previously mentioned process of selecting a location?s operator. The capability to hire, train, and motivate employees in accordance to the founders principals is extremely valuable, rare, inimitable and non-substitutable. It is the organizational capabilities drawn from the human resources of all employees, from the executive board to behind the counter, that ensure the high levels of customer service we expect from Chick-fil-A. The firm?s human resources also reflect a high level of social complexity; it is these practices and principals that have given Chick-fil-A its strong brand name, creating a reputation with customers for quality and reliability. The human resources and capabilities of Chick-fil-A are path-dependent; they cannot easily be recreated or imitated by a competing firm, they cannot be bought but must be built over time. ...read more.