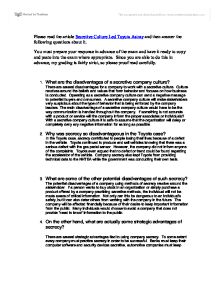 Company culture - secrecy and the possible drawbacks for customers. Examples from Toyota and Apple.

Originally Apple denied all reports that stated the antenna was causing the dropped calls. However, facts were presented that proved Apple was wrong and that the phone was causing the issue. Apple was able to fix the problem quickly and provided a solution for customers who were currently using the phone. I feel that Apple would have continued to deny that they were at fault for the defect as long as possible. This is very similar to Toyota because their initial response to the gas pedal defect was that it was the drivers fault. Toyota also continued to deny allegations about the sensory problems for as long as possible. The difficult question to answer would be if Apple was producing cars that were responsible for people dying, would they inform the drivers or would they deny the allegations and respond by saying it is the drivers fault like Toyota? 7. Is Toyota's system of management truly flawed or is this just part of the pros and cons that any firm's culture naturally brings with it? Toyota's system of management truly is flawed. I can understand that the business side of Toyota suggested not saying a word that is negative about the company or the gas pedal. However, when there is a defect that is causing serious injury it would be admirable for a company to acknowledge the possible danger. ...read more.

If you're unsure where to start, your organization's mission statement or annual goals might hint at the qualities that are most valued by the company. Should HiPos be informed? Whether or not you decide to alert high potential employees that they've been identified can be a tough decision. Letting HiPos know that they've been identified could encourage them to stay with your company. On the other hand, alerting HiPos could also have the effect of dividing your workforce into those employees who feel valued by the organization and those who don't. If you publicly identify HiPos, you could lose some of your middle-of-the-road performers who feel they aren't being properly recognized. You may even lose some high potential individuals if you failed to recognize them. What keeps employees happy? According to a 2009 survey by Spherion, employers believe that employee retention is driven by management climate, supervisor relationship, and the organization's culture. However, employees themselves indicate that their top three retention drivers are benefits, financial compensation, and growth and earnings potential. Of course, if this kind of disconnect exists in your organization, you may be devoting resources to the wrong areas in an effort to retain employees. Don't be afraid to ask your employees what is most valuable to them. Once you know this, be sure to clearly communicate to your HiPos what kinds of opportunities and benefits you are willing to offer them now and down the road. ...read more.