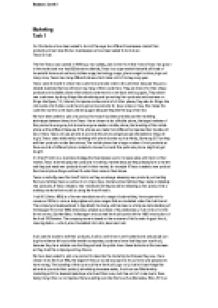 Comparing the marketing of Tescos and Audi.

﻿Business Level 3 Marketing Task 1 For this task we have been asked to look at the ways two different businesses market their products and services the two businesses we have been asked to look at are Tesco & Audi. The first Tesco was opened in 1919 by a man called; Jack Cohen from that 1 store Tesco has grown in the market and now has 923 stores worldwide, Tesco is a supermarket that sells all kinds of household items such as food, clothes range, technology range, phone range furniture, toys and many more, Tesco has many different stores which make a lot of money every year. Tesco uses its brand to obtain new customers and also retain old customers because they are a reliable business that is well known by many of their customers. They are known for their cheap products and suitable prices which attract customers to come back and buy again, They obtain new customers by doing things like advertising and promoting their products and business on things like flyers, T.V, Internet, Comparison ...read more.

An Ansoff matrix is a business strategy that businesses use to increase sales and improve their market, Tesco is developing new products in existing markets because they already have a market and they just need new products to sell in their market, for example if Tesco created a new product their brand phone they would sell it under their name in their stores. Tesco constantly uses the Ansoff matrix as they are always releasing new products, and selling them, sometimes Tesco would work on improving a market and sometimes they create completely new products, If Tesco release a new mobile phone they would be releasing a new product into a existing market which would be using the Ansoff matrix. Audi AG (Xetra: NSU) is a German manufacturer of a range of automobiles, from supermini to crossover SUVs in various body styles and price ranges that are marketed under the Audi brand. The company is headquartered in Ingolstadt, Germany, and has been a wholly owned subsidiary of Volkswagen AG since 1966, following a phased purchase of its predecessor, Auto Union, from its former owner, Daimler-Benz. ...read more.

dealerships/shops which sell their cars, Audi has a lot of rivals due to there being many other car companies that are selling cars like them such as Mercedes, Bmw, ECT, so Audi will have to be better that the other companies and prove that they are the best car dealer on the market. An Ansoff matrix is a business strategy that businesses use to increase sales and improve their market; Audi is constantly creating new products in their existing markets, and sometimes creating new products for new markets, for example Audi would not start a new company to sell new products under, they would just make new products which would be cars and sell them under their current name which would be Audi. Audi constantly uses the Ansoff matrix as they are always making new cars and selling them, sometimes Audi would work on improving a market and sometimes they create completely new products, for example If Audi created a new car they would sell it under their brand name and this is using the Ansoff Matrix. ...read more.