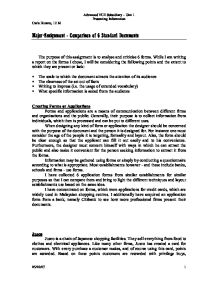 Major Assignment - Comparison of 6 Standard Documents The purpose of this assignment is to analyse and criticise 6 forms. While I am writing a report on the forms I chose, I will be considering the following points and the extent to which they are present or lack: * The scale to which the document attracts the attention of its audience * The clearness of the set out of facts * Writing to impress (i.e. the usage of extended vocabulary) * What specific information is asked from the audience Creating Forms or Applications Forms and applications are a means of communication between different firms and organisations and the public. Generally, their purpose is to collect information from individuals, which then is processed and can be put to different uses. When designing any kind of form or application the designer should be concerned with the purpose of the document and the person it is designed for. For instance one must consider the age of the people it is targeting, formality and layout. Also, the form should be clear enough so that the applicant can fill it out easily and to his convenience. Furthermore, the designer must concern himself with ways in which he can attract the public and also make it convenient for the person seeking information to extract it from the forms. ...read more.

Already the front page has pictures around the border showing various items. Also, it is crowned with a close up photograph of the card that is advertised. Then, in bold red letters, there is a slogan, which is meant to attract the reader. It says "The card that takes your shopping further". Further down the page there are sub-headings, which already give a brief introduction to the contents of the form. When the form is opened, I must say that it immediately impresses me. If I was to apply to a shopping bonus card then I would definitely fall for Metrojaya. There are big white headings on a red background indicating what a costumer stands to gain from the use of this card. Also there is a table that briefly shows what a costumer gains when he/she has a certain number of points. Underneath, there is a brief explanation of how the points are awarded and a reference to a telephone number for more information. After that there is a very well laid out section where the applicant is supposed to fill out his personal profile where there is comparatively more space available than in the J-card application form. The information that is asked from the applicant is basically the same as the one mentioned for the J-card above which was name, address, birth date, sex, nationality, religion, and profession details such as amount of monthly income. ...read more.

The form, however, which in terms of style, presentation and layout of facts is best is Metrojaya's form. * Writing to impress (i.e. the usage of extended vocabulary) All forms indicate some formality to a certain extent for they are addressing the public. However, the for which indicates most formality and uses most extended vocabulary is the Citibank form. This is, of course, because banks are in closer contact with their clients than shopping centres. * What specific information is asked from the audience Finally, all forms ask for the same information, which concentrates around a client's personal profile. The form that requires most personal information is Citibank's credit card application. Overall the best forms in terms of layout, clearness, attractiveness and wording are the forms designed by Metrojaya and Citibank. I think that they are particularly successful in comparison with the Jusco forms and that they therefore have been able to attract more clients for the purpose of using credit cards. I would, however, prefer the Metrojaya form because the Citibank form is too overflowed with information. The layout of this form is therefore not as easy and vivid as the Metrojaya form. If I was to write a form I would base it on the layout of Metrojaya which in terms of everything is still the best. ?? ?? ?? ?? Advanced VCE Subsidiary - Unit 1 Presenting Information Carla Bizarro, 12 M 1 1 05/02/07 ...read more.