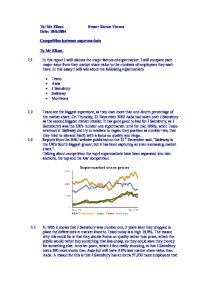 To: Mr Elkon From: Karan Varma Date: 10/6/2004 Competition between supermarkets To Mr Elkon, 1.1 In this report I will discuss the major factors of supermarket. I will compare each major issue from they market share value to the numbers of employees they each have. In this essay I will talk about the following supermarkets * Tesco * Asda * J Sainsbury * Safeway * Morrisons 1.2 Tesco are the biggest superstore, as they own more than one-fourth percentage of the market share. On Thursday, 21 December 2000 Asda had taken over J Sainsbury as the second biggest market retailer. It has gone good to bad for J Sainsbury, as J Sainsbury's was the UK's number one supermarket until the mid 1990s, when Tesco overtook it. Safeway did try to retaliate to regain they position as number two, that they tried to rebrand itself, with a focus on quality and range. 1.3 Reports from the BBC website published on the 21st December said, "Safeway is the UK's fourth-biggest grocer, but it has been capturing an ever-increasing market share." ...read more.

They were bids from all supermarkets from buying a big or a less percentage of Safeway. At the end it was Morrisons, with market share value of 6%. The reasons why many giant superstores was interested was that Safeway was strong in the northwest. Safeway had accepted a bid from Morrison for approximately �3.2billion. The reason why Safeway had decided to sell they business or sell a percentage of they business is that they did not make enough profit but instead they profit had declined as the store said sales in the 12 weeks to 3 January fell 4.1%. 4.1 Tesco owns the majority of the market share value than any other supermarkets they own 26% market shares with a incredible turnover of a huge �25.7 billion. They reason for they success was that they were big on non-food sales. They also recently bought 862 convenience stores to push into neighbourhood retailing. 4.2 The main reason for Tesco and Asda success is that they like I have already mention that they big on non-food sales as well. ...read more.