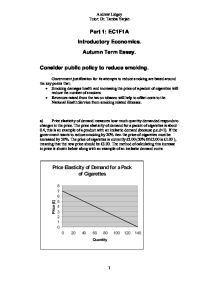 Part 1: EC1F1A Introductory Economics. Autumn Term Essay. Consider public policy to reduce smoking. Government justification for its attempts to reduce smoking are based around the key points that: * Smoking damages health and increasing the price of a packet of cigarettes will reduce the number of smokers. * Revenues raised from the tax on tobacco will help to offset costs to the National Health Service from smoking related illnesses. a) Price elasticity of demand measures how much quantity demanded responds to changes in the price. The price elasticity of demand for a packet of cigarettes is about 0.4, this is an example of a product with an inelastic demand (because p.e.d<1). If the government wants to reduce smoking by 20% then the price of cigarettes must be increased by 50%. The price of cigarettes is currently �2.00 (50% 0f �2.00 is �1.00 ), meaning that the new price should be �3.00. The method of calculating this increase in price is shown below along with an example of an inelastic demand curve. ...read more.

This ability to give up smoking more easily is indicated by the higher price elasticity of teenagers, they are more prepared to give up than adults are when the price of cigarettes is increased. In conclusion, the government policy to reduce smoking by increasing the price of cigarettes will work, however it will take a long while. Some people simply do not want to give up smoking and although they cannot really afford to smoke, will carry on regardless. It is people like this who will not see the health issues behind the increase in price of cigarettes but only that they are being forced to pay more for their habit, they will be all to quick to criticise the government for placing an unfair tax on those who feel that they have no choice but to pay. Perhaps a better method for reducing the number of smokers would be to increase the price less and make up for this by banning smoking in public places, banning tobacco advertising within the community (including sporting events and billboards etc.) and increasing awareness as to just how much smoking really does harm your body. ...read more.