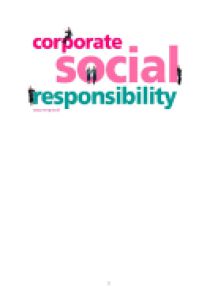 ﻿________________ Indicate to what extent, and for what reasons, you believe that large corporations with a global reach need to be encouraged or compelled to engage with the corporate social responsibility agenda. Corporate Social Responsibility (CSR) is a relatively new concept that has acquired more importance in recent years. Earlier, the prime focus of companies / organisations and businesses used to be only on generating profits and improving their bottomlines, even if that meant that they had to make use of unethical or destructive activities like polluting the environment or disturbing ecology / natural habitats. However, companies began to realise that ethical and fair practices in their operations would only help them attract and retain both customers and employees. They responded by adopting a ?New Consciousness / Awareness?, which has been termed Corporate Social Responsibility (CSR). This term was coined sometime in the 1970s, which is when this concept started gaining currency (Idowu and Filho, 2008). With globalisation, businesses and corporations are no longer restricted within the established borders of their respective nation ? states / countries. One of the main features of globalisation is that the market spreads up and there are changes in the ways of production. ...read more.

This is not to say that businesses have not, by themselves, made social contributions without pressure from outside; there are examples like Joseph Rowntree, better known as a philanthropist than a chocolatier, and others who developed their workforce in exemplary ways. In the 1980s, a group of companies joined together to set up ?Business in the Community? (BITC). Then they established the ?Per Cent Club? whose members donated 1 % of their pre-tax profits to the society/community. BITC has become an influential force not only in business circles but also in the CSR space. It has even developed a set of 27 indicators to evaluate and report CSR, in terms of 4 impact areas ? the environment, workforce, community and the market place (Crane, 2008). Though the debate about CSR in a worldwide context is important, there has been little empirical research on the topic. An exception is Baskin?s research where he compares CSR report of 127 companies from 21 developing markets with that of over 1,700 leading companies in developed high-income countries (Hopkins, 2006). What was found was that, interestingly, companies in emerging markets are more inclined to report extensively on corporate social investment activities than OECD companies. ...read more.

As we have seen, it is not just about philanthropy or benefiting the companies in non ? financial ways in terms of image and reputation, it indirectly helps in increasing profitability and margins too. Companies should recognise that there are hidden costs of not being able to adhere to this vital responsibility to society, that is more of a moral obligation than a legal necessity. It has oft been suggested that CSR should be integrated into business strategy to gain competitive advantage (Porter, 2008). In conclusion, we can say that although a lot has been done in the area of corporate social responsibility, with organisations realising that they are ethically and morally accountable for their actions, and need to conscientiously return to people, society and environment what they have taken from them. Moreover, they should know that doing this would eventually benefit them in the long run. There are, however, problems of standardization associated with CSR, but it is believed that a level field will appear as the stakeholders keep increasing. The concept should be given more attention and prominence in a global context so that underdeveloped or unregulated areas are not exploited for profit motives by multinational corporations. ...read more.