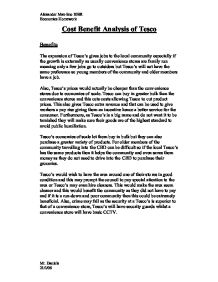 Cost Benefit Analysis of Tesco Benefits The expansion of Tesco's gives jobs to the local community especially if the growth is externally as usually convenience stores are family run meaning only a few jobs go to outsiders but Tesco's will not have the same preference so young members of the community and older members have a job. Also, Tesco's prices would actually be cheaper than the convenience stores due to economies of scale. Tesco can buy in greater bulk than the convenience stores and this cuts costs allowing Tesco to cut product prices. This also gives Tesco extra revenue and that can be used to give workers a pay rise giving them an incentive hence a better service for the consumer. Furthermore, as Tesco's is a big name and do not want it to be tarnished they will make sure their goods are of the highest standard to avoid public humiliation. ...read more.

Also, crime may fall as the security at a Tesco's is superior to that of a convenience store, Tesco's will have security guards whilst a convenience store will have basic CCTV. Costs If Tesco's discover that their recent venture into this area has not been successful they may bail themselves out with the revenue from other stores and this potentially could leave a poor area without a local corner shop. This would affect elderly people as they may have to go out on very cold days to the city centre just for milk. Also, the jobs established when Tesco's took over will be lost and will cast a sense of insecurity over a community especially if work is hard to find. Furthermore, the CC has already shown it is no doing its job efficiently to allow Tesco's to get to current position so their will not be anything stopping them. ...read more.

hardcore criminals and security guards are not equip to deal with armed criminals especially if the store is situated in a depraved area. Also, people are more prone to fly-tipping and general littering where there is a crowd. Conclusion I conclude that a local Tesco's in respect to my local precinct has been a success yet certain measures are needed to allow the local consumers and businesses to survive. There are no convenience stores within a mile of my local Tesco's and the traffic was terrible due to irresponsible parking; this has only been resolved with the building of a new car park. Also, if this Tesco's were to close then the local council estates would be left with no stores and the bus service in the area is below standard. However, the benefits outweigh the costs in this situation. Alexander Max-lino 10BR Economics Homework Mr. Daniels 21/1/06 ...read more.