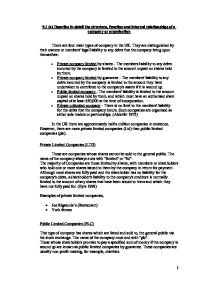 Describe in detail the structure, function and internal relationships of a company or organisation

The players generally require continual pressure and direction from the leader in order to get things done. The autocratic approach is not a good way to get the best performance from a team. This may be because the players may feel like amateurs, and the team cohesion will drop and this type of leadership often leads in players leaving the team or getting together to form a mutiny. The autocratic style if often good to use when coaching either young children or beginners, because they do not know about warm ups, drills, tactics and positions, so an autocratic coach would be needed. The Laissez-Faire leadership style The Laissez-Faire leadership style has little control over the team. The team can often be left to sort out their roles and tackle their work, without participating in this process himself. In general, this approach leaves the team floundering with little direction or motivation. There are situations where the Laissez-Faire approach can be effective. The Laissez-Faire technique is usually only appropriate when leading a team of highly motivated and skilled people, who have produced excellent work in the past. Teenages and young sunday league teams benefit from this type of manager, because they like to be involved in choosing their own training drills and warm up by themselves. They may have little patience for an autocratic coach. Once a leader has established that his team is confident, capable and motivated, it is often best to step back and let them get on with the task, since interfering can possibly cause anger from the players. The Democrat The democratic leader makes decisions by consulting their team, whilst still maintaining control of the group. The democratic leader allows their team to decide how the task will be tackled and who will perform which task. The democratic leader can be seen in two ways. A good democratic leader encourages participation and motivation, but never loses sight of the fact that he has the crucial responsibility of leadership. ...read more.

Fig3 - Example of an evidence sheet Evidence sheet Name ......... Sheet No: ...... Time / Date Details Work number Evidence Observed by Action Plan Competent Y / N The Evidence Sheets record details of activities and tasks that you have performed in the role. The recording of the activities is vital as this will be supporting evidence in fulfilling the role. It is a good idea to complete the evidence sheets after an action plan to help in future performance. Example1, Subject1 is often late for work, and has punctuality issues. The employer of the business decides to set out an action plan to improve subject1's punctuality, to increase performance at work. Example Action Plan (Name) Subject1 (Admin No)574 (Date Joined) 21st Feb 02 Following a meeting on 01 Mar 02 an Action Plan was created, using the SMART mnemonic. This Action Plan has been accepted and agreed by all parties involved. Specific Fails to arrive to work on time on a regular basis, so therefore not completing sufficient work tasks, letting down the team. Measurable To record all signing in times and report to supervisor, and record evidence of work completed Achievable Yes, following guidance from supervisor. Relevant In order to achieve this area of development it is also necessary to improve work performance. Time related Within 4 weeks, during the mentoring period. Signatures: Individual: (Name) Subject1 (Admin No) 574 Supervisor: (Name) Supervisor1 (Admin No) 1234 Manager (Name) Manager1 Performance Review After the action plan has been completed a performance review could be issued, to check the action plan was completed as required and to give the individual feedback in relation to performance. This is an opportunity to motivate an individual and give praise if required. If the performance review was successful then another performance review should be monitored after an agreed period of time to check that the individuals performance is still satisfactory, e.g. subject1 is now arriving at work on time regularly. However, if the performance review showed that the subject had not improved and completed the required task then further action should be taken. 1 ...read more.