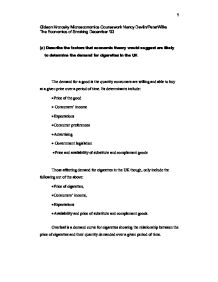 Describe the factors that economic theory would suggest are likely to determine the demand for cigarettes in the UK.

Gideon Krotosky Microeconomics Coursework Nancy Devlin/PeterWilks The Economics of Smoking December '03 (a) Describe the factors that economic theory would suggest are likely to determine the demand for cigarettes in the UK The demand for a good is the quantity consumers are willing and able to buy at a given price over a period of time. Its determinants include: * Price of the good * Consumers' income * Expectations * Consumer preferences * Advertising * Government legislation * Price and availability of substitute and complement goods Those affecting demand for cigarettes in the UK though, only include the following out of the above: * Price of cigarettes, * Consumers' income, * Expectations * Availability and price of substitute and complement goods. Overleaf is a demand curve for cigarettes showing the relationship between the price of cigarettes and their quantity demanded over a given period of time. It is evident that at price P, Q cigarettes are demanded but when prices rise to P1, the quantity demanded of cigarettes falls to Q1 and there is a movement upwards along the demand curve. ...read more.

It results in the supply curve shifting upwards by the amount of the tax as shown below. As the tax is a per unit tax i.e. a specific tax, there is a parallel shift upwards, because the amount of the tax is the same at all prices. The supply curve shifts upwards when a tax is imposed because in order for firms to be persuaded to produce the same quantity of cigarettes as before the levying of the tax, they need to receive a price, which allows them fully to recover the tax they have to pay i.e. P1+tax. Before the imposition of the tax, the equilibrium point is at P1 Q1, but after the tax it is now at P2 Q2. Since cigarettes are an addictive good, they have a very inelastic (i.e. steep) demand curve. However, evidence shows (Patrick C. Gallagher) that among those under the age of 25, it is likely that if prices of cigarettes were to rise through taxes, individuals would not have the money to afford such a habit unless through crime, and the opportunity cost for a packet of cigarettes would now be a lot greater for this age group. ...read more.

(c) In what other ways do Governments intervene in the market for cigarettes? If consumers are well informed and rational, as consumer choice theory assumes, why are such interventions deemed necessary? Government methods of intervention apart from taxes include: 1) Provision of educational campaigns in schools to dissuade children from starting smoking. 2) Restricting where smoking takes place. Smoking is now banned in many public places in the UK including: cinemas, trains, buses and aeroplanes. This is mainly to help prevent passive smoking, which according to statistics is responsible for approximately 3000 lung cancer deaths each year in non-smoking adults and harms the health of hundreds of thousands of children (Economics of Smoking Bans 7/03: page1). 3) The selected banning of billboard advertising. This has proved invaluable in the past in helping to reduce the consumption of cigarettes (Basic Facts No.3: 10/03: page1). 4) The restriction of duty free quantities of cigarettes at portals of entry to the country as well as vigorous campaigns by customs officers to seek out those suspected of smuggling tobacco. A rational consumer is one who weighs up the costs and benefits of consuming an additional unit of a good and attempts to maximise his/her total consumer surplus. ...read more.