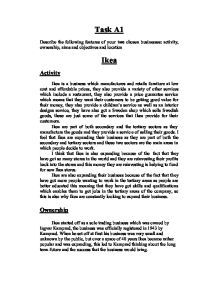 Describe the following features of your two chosen businesses: activity, ownership, aims and objectives and location.

Task A1 Describe the following features of your two chosen businesses: activity, ownership, aims and objectives and location Ikea Activity Ikea is a business which manufactures and retails furniture at low cost and affordable prices, they also provide a variety of other services which include a restaurant, they also provide a price guarantee service which means that they want their customers to be getting good value for their money, they also provide a children's service as well as an interior designs service, they have also got a Sweden shop which sells Swedish goods, these are just some of the services that Ikea provide for their customers. Ikea are part of both secondary and the tertiary sectors as they manufacture the goods and they provide a service of selling their goods. I feel that Ikea are expanding their business as they are part of both the secondary and tertiary sectors and these two sectors are the main areas in which people decide to work. I think that Ikea is also expanding because of the fact that they have got so many stores in the world and they are reinvesting their profits back into the stores and this money they are reinvesting is helping to fund for new Ikea stores. ...read more.

The Ikea store that we are focusing on is located in Wednesbury it was opened in 1990; this is a very good location for the store as they are located near a motorway so this brings in more customers as cars are travelling in from all directions. It is also very good to be located by a motorway as it provides better transport links. It is good for Ikea because they have got competitors nearby; it is good for Ikea to have competitors nearby because if people are going to visit other competitive shops just opposite, this will provide more business coming Ikeas way as more people will stop off at other shops and decide to pop into Ikea to have a browse and as Ikea provides such great prices customers will be tempted to buy from them instead of their oppositions. It is also very good because Ikea has its very own restaurant this is also good because if people fancy a bite to eat they can stop off at Ikea and eat there. A motorway locates them, as it's closer to their customers, a motorway also situates Ikea and it's open in the Midlands because it's easier for them to find highly qualified staff, as Birmingham is a densely populated area. ...read more.

product but their main head quarters are situated in Germany, but the one we are focusing on is the one which is situated locally to us, which is in West Bromwich. Being located in West Bromwich is very beneficial to Lansing Linde as West Bromwich is a town centre and there are many people who live round the area. Many people also travel in from Birmingham, so there are many people who live around the area, who may have very good skills and could be looking for work this is a great opportunity for them, as Lansing Linde can provide them with jobs and at the same time look to expand their business. There is also the fact of having good transport links around for example the motorways and road links, as they have to get their product to the consumer it is good having motorways nearby as it is easier to transport goods to a place further away whereas if it is near you can just transport it by travelling on the roads. It is also good for Lansing Linde to be located in West Bromwich because of the fact that there are many big industrial businesses located around their and also in Birmingham so their products will be selling better and they will make large amounts of profits. ...read more.