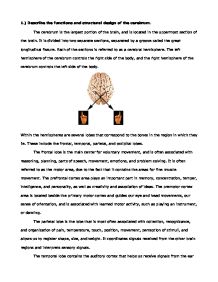 Describe the functions and structural design of the cerebrum.

1.) Describe the functions and structural design of the cerebrum. The cerebrum is the largest portion of the brain, and is located in the uppermost section of the brain. It is divided into two separate sections, separated by a groove called the great longitudinal fissure. Each of the sections is referred to as a cerebral hemisphere. The left hemisphere of the cerebrum controls the right side of the body, and the right hemisphere of the cerebrum controls the left side of the body. Within the hemispheres are several lobes that correspond to the bones in the region in which they lie. These include the frontal, temporal, parietal, and occipital lobes. The frontal lobe is the main center for voluntary movement, and is often associated with reasoning, planning, parts of speech, movement, emotions, and problem solving. It is often referred to as the motor area, due to the fact that it contains the areas for fine muscle movement. The prefrontal cortex area plays an important part in memory, concentration, temper, intelligence, and personality, as well as creativity and association of ideas. The premotor cortex area is located beside the primary motor cortex and guides our eye and head movements, our sense of orientation, and is associated with learned motor activity, such as playing an instrument, or dancing. ...read more.

Neurons are neural cells that are used to form a sensory pathway throughout the body system. They consist of two main 'pathways,' the dendrite, and the axon with a cell body in the middle. However, neuroglia are 'supporting cells' for the neurons, and often have several different forms. There are four types of neuroglia; astrocytes, microglia, oligodendroglia, and Schwann cells. For the most part, each of these types of neuroglia have their own unique shape and function, depending on where they are located. Astrocytes typically cover surfaces of capillaries of the brain, and help form a blood-brain barrier which aids in the regulation of the passage of nutritive and chemical molecules to the brain neurons. They are able to influence diffusion rates and provide an opportunity for active transport. They are somewhat similar in structure to neurons, but do not have a dendrite or axon; instead, they have extended "feet" that create a 'star' shape. The specific functions of oligodendrocytes are unknown; they cover the exposed surfaces of neurons and aid in holding the nerve fibers together. Like astrocytes, they have slender extensions, although oligodendrocytes do not have as many extensions as astrocytes. Their cell bodies are smaller, and typically rounder in shape. Microglia are actually phagocytotic white blood cells that have migrated through the capillaries and serve as moving defense mechanisms for the central nervous system. ...read more.

The innermost layer, the pia mater, is a thin, compact membrane that closely adapts to the brain and spinal cord and also serves to provide nutrition and provides a blood source for the tissues. The middle layer, the arachnoid layer, is less dense than the outside layer and is weblike in appearance, providing a soft cushion. The outermost layer, the dura mater, is hard, tough, and dense, protecting against a blow to the head. 10.) Discuss the functions of neurotransmitters. Name the two general types of these chemicals and give examples of each. Neurotransmitters are certain chemicals that are released when an electric pulse reaches the end of an axon branch. These chemicals diffuse across a synaptic gap, and are picked up by receptor chemicals on the end of the dendrites of a neighbor neuron. The process of absorption to the new cell changes the state of the electrical pulse flowing through the neuron. If there are enough signals coming through to the neuron cell from its neighbor neurons, this generates a big enough charge to generate a new pulse in the neuron, thus sending it on and repeating the process in a new cell. The two general types of neurotransmitter chemicals are exciter neurotransmitters and inhibitor neurotransmitters. An example of an exciter neurotransmitter is norepinephrine, which is important in the brain and in portions of the autonomic nervous system. An example of an inhibitor neurotransmitter is dopamine, which is a central nervous system inhibitor. 2 ...read more.