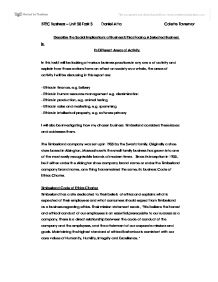 Describe the Social Implications of Business Ethics Facing A Selected Business In Its Different Areas of Activity In this task I will be looking at various business practices in any area of activity and explain how those actions have an effect on society as a whole, the areas of activity I will be discussing in this report are: - Ethics in finance, e.g. bribery - Ethics in human resource management e.g. discrimination - Ethics in production, e.g. animal testing - Ethics in sales and marketing, e.g. spamming - Ethics in intellectual property, e.g. software privacy I will also be investigating how my chosen business Timberland considers these issues and addresses them. The Timberland company was set up in 1955 by the Swartz family. Originally a shoe store based in Abington, Massachusetts the small family business has grown into one of the most easily recognisable brands of modern times. Since its inception in 1955, be it either under the Abington shoe company brand name or under the Timberland company brand name, one thing has remained the same, its business Code of Ethics Charter. Timberland Code of Ethics Charter Timberland has a site dedicated to their beliefs of ethics and explains what is expected of their employees and what consumers should expect from Timberland as a business regarding ethics. Their mission statement reads, 'We believe the honest and ethical conduct of our employees is an essential prerequisite to our success as a company. There is a direct relationship between the code of conduct of the company and the employees, and the attainment of our corporate missions and goals. Maintaining the highest standard of ethical behaviour is consistent with our core values of Humanity, Humility, Integrity and Excellence. ' Area of Activity: Ethics in Finance In regards to ethics, when most people think of ethics they think of various scandals and illegal trading which appears to be ever present in the news such as insider trading, bribery, lobbying and executive pay. ...read more.

You also need to discuss the ethical concerns that some have in regards to recruitment. What must Timberland ensure they do to ensure fairness in recruitment (use you unit 13 notes, e.g. same interviews questions, balanced interview panel, etc.) Has Timberland been accused of discrimination in recruitment? If not, include a business which has! You also need to discuss the concerns some have about the increasing level of workplace surveillance - why are people concerned? Use the Facebook example we discussed in class! Area of Activity: Ethics in Production The production process involves transferring a range of inputs into the outputs desired by the target market. The production process requires two main resources; the transforming resources and the transformed resources. Transforming resources include the building where the product is manufactured, machinery, computers and employees. The transformed resources are the raw materials which compose the end product. To make sure that their production process is ethical a business must look at a range of issues such as: * Genetically modified food - Many food producing companies in the US have come under heavy criticism for modifying their products without informing customers. One of the more recent cases was Monsanto - An agricultural company which helps farmers develop new technology and produce better quality crop was charged by the California Northern District Court with for producing low quality crop which was to be distributed to countries which forbid the growing of genetically modified crops. Although no charges were ever made against the company, it was a wake up call to other businesses that their practices are being closely monitored and scrutinised. However they argue that in order to protect the food from insects, parasites, weed and unfriendly bacteria it must be genetically modified so that they aren't attracted to it in anyway. By keeping the insects away there will be more crop which means more money for the farmers however many people believe this is an unethical tactic used by farmers to get as much money as possible and that the GM food could contain harmful viruses or diseases. ...read more.

Eventually enough evidence was put together to charge the creators of Limewire who were subsequently fined, jailed and had their peer to peer sharing software shut down permanently. Piracy is a growing concern and is becoming a losing battle for prosecutors as many websites which stream illegally sourced movies and songs are being shut down and are back live again under a similar name on a new server within an hour. Implications If a business chooses to ignore the ethical concerns of its customers then they are giving themselves a negative image and gain negative publicity and bad press which will cause them to lose money and drive away customers. Every business must make sure it listens to and takes into consideration the different corporate and environmental implications in order to ensure their popularity is maintained and attract more customers. Corporate implications are to do with the day to day running of a business looking at the corporate social responsibility policies, employee hiring and firing, consumer protection and managing suppliers. The Timberland Company have a clear Code of Ethics Charter which is available to all employees, investors, potential customers, potential investors and general members of the public. Their charter was set up to show employees and partners and future partners what Timberland is trying to achieve ethically as a business. Environmental implications are ethical issues which affect the environment such as pollution, recycling, using renewable sources and water conservation. Timberland have become very environmentally ethical since 2006 and have created a whole new line of products created solely from recycled products using renewable energy. Timberland also has a website detailing their four pillars which they have built their organisational structure around, the four pillars are : - Energy : Becoming carbon neutral - Products : Design products for recyclability - Workplaces : Fair, safe and non-discriminatory workplaces - Service : Community greening Conclusion In conclusion I believe that in order for a business to be truly ethical it must take into consideration all environmental and corporate implications and analyse their business practices before truly declaring themselves as an ethical business. ...read more.