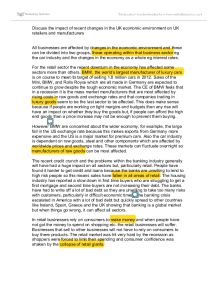 Discuss the impact of recent changes in the UK economic environment on UK retailers and manufacturers All businesses are affected by changes in the economic environment and these can be divided into two groups, those operating within that business sector eg the car industry and the changes in the economy as a whole eg interest rates. For the retail sector the recent downturn in the economy has affected some sectors more than others. BMW, the world's largest manufacturer of luxury cars is on course to meet its target of selling 1.8 million cars in 2012. Sales of the Mini, BMW, and Rolls Royce which are all made in Germany are expected to continue to grow despite the tough economic market. The CE of BMW feels that in a recession it is the mass market manufacturers that are most affected by rising costs in raw goods and exchange rates and that companies trading in luxury goods seem to be the last sector to be affected. This does make sense because if people are working on tight margins and budgets then any rise will have an impact on whether they buy the goods but, if people can afford the high end goods then a price increase may not be enough to prevent them buying. ...read more.

When the GDP falls for 6 months or more, this is technically known as a recession. Although we are not officially in a recession now the GDP has not grown so many businesses are struggling because of demand falling and profits down. Some companies have reported good profits eg Tescos and Marks and Spencer have seemed to do well over the Christmas period. Marks and Spencer have reported higher sales of their food, particularly the fine food but sales in their clothes have fallen so people do seem to comfort themselves with nice things to eat and skimp on clothes. This will obviously affect some manufacturers more than others with those in the food sector doing very well but the textile manufacturers struggling. Cadburys have also seen an increase in their profits so not all retailers are suffering. They have found that when people are a bit worried about the economy, their jobs and rising prices they often turn to chocolate to cheer them up so these manufacturers are doing reasonably well. However they still have to buy the raw goods like cocoa on the world market so are dependent on global prices and exchange rates. This can have an impact on prices but for the moment, it does not seem to have deterred people. ...read more.

This deficit is the difference between the money the government raises in taxes and the money it is spending on public services. At the moment the government is spending huge amounts servicing the county's debts on loans so the policy is to reduce the public service costs and reduce the debts. The UK economy is in a downward turn at the moment largely due to the banking problems in 2008 and the new government policy of reducing the deficit in a very quick timescale so that there is a squeeze on public services. People generally feel uncertain about job security, pay rises are frozen in many sectors but prices are rising so people are going to see a drop in their income. The retailing industry is at the front end of this with people making choices about where and what to buy. Some luxury goods are still in demand because of people on high incomes maintaining their standard of living. Despite the banking crisis and bale out by the government, employees are still getting high bonus payments. Manufacturers are being hit by the exchange rates if they are importing raw goods and the rising fuel prices. They are also under threat if production can be moved to cheaper countries where staff and machinery is cheaper. ...read more.

The writer introduces a number of important external economic influences - recession, rising prices, fluctuating exchange rates, rising raw material costs. Their effects are not systematically covered and the writer is unclear about the difference between manufacturing and retail. Manufacturing companies have to sell their products but this does not make them retailers