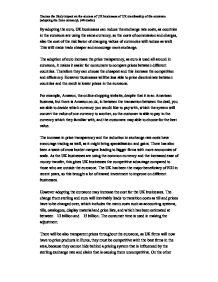 Discuss the likely impact on the success of UK businesses of UK membership of the eurozone (adopting the Euro currency). (40 marks)

By adopting the euro, UK businesses can reduce the exchange rate costs, as countries in the eurozone are using the same currency, so the costs of commission and charges, also the cost of the risk factor of changing values of currencies will reduce as well. This will make trade cheaper and encourage more exchange. The adoption of euro increase the price transparency, as euro is used all around in eurozone, it makes it easier for consumers to compare prices between different countries. Therefore they can choose the cheapest and this increase the competition and efficiency. However businesses will be less able to price discriminate between countries and the result is lower prices in the eurozone. For example, Amazon, the online shopping website, despite that it is an American business, but there is Amazon.co.uk, in between the transaction between the deal, you are able to decide which currency you would like to pay with, which the system will convert the value of one currency to another, so the customer is able to pay in the currency which they familiar with, and the customers may able to choose for the best value. ...read more.

The consumer time is used in making the adjustment. There will be also transparent prices throughout the eurozone, as UK firms will now have to price products in Euros, they must be competitive with the best firms in the area, because they cannot hide behind a pricing system that is influenced by the sterling exchange rate and claim that is causing them uncompetitive. On the other hand the competitiveness is depends on the exchange rate between euros and sterling. In 2007, there was an exchange rate of 1: 1.48, which made the UK businesses very uncompetitive. However, due to the crisis in Greece, the euro has been dropped sharply to now 1: 1.14, which means the UK product become competitive. The fluctuating exchange rate between sterling and the euro exposes businesses to potential currency risk, if they commit to sell at a price in euros and the euro weakens against sterling before they receive payment, they will have lost out. ...read more.

lot of business conditions, and so a higher interest rate is likely to lead to a fall in investment, and businesses might have less incentives to improve. In conclusion, the adoption of euro will encourage trade which will benefit the every business as they might have more revenue gained, also could have boost some profit to the business and lead to a greater success. But the adoption could also lead to a great danger, it is because if the UK joins the eurozone, UK will be also affected by the crisis in Greece and lead to depreciation in euro, and businesses will be suffered a lot and some may even lose out in the market. Also at present there are still no plans for the UK to join the euro, so now businesses can suffer less, and also as UK expectation growing, business might reach success soon. ?? ?? ?? ?? Discuss the likely impact on the success of UK businesses of UK membership of the eurozone (adopting the Euro currency). (40 marks) ...read more.