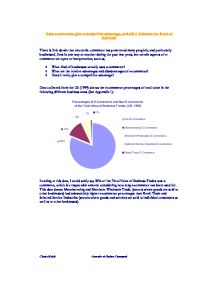 Does e-commerce give a competitive advantage, and will it influence the future of business?

Does e-commerce give a competitive advantage, and will it influence the future of business? There is little doubt that electronic commerce has penetrated many people's, and particularly businesses', lives in one way or another during the past few years, but certain aspects of e-commerce are open to interpretation, such as; * What kind of businesses actually uses e-commerce? * What are the relative advantages and disadvantages of e-commerce? * Does it really give a competitive advantage? Data collected from the US (1999) shows the e-commerce percentages of total value in the following different business areas (See Appendix 1): Looking at this data, I could safely say 20% of the Total Value of Business Trades was e-commerce, which is a respectable amount considering how long e-commerce has been used for. This data shows Manufacturing and Merchant Wholesale Trade, (sectors where goods are sold to other businesses) had substantially higher e-commerce percentages than Retail Trade and Selected Service Industries (sectors where goods and services are sold to individual consumers as well as to other businesses). Looking closer at the percentages, if all manufacturing and wholesale e-commerce was entirely business to business trade and all retail and service e-commerce activity was entirely business to consumer, more than 90 percent of total e-commerce would be business to business. ...read more.

Egg estimates that 54% of Britons are now using interactive technologies, which is probably why they also report that a huge increase of 37.5% in online banking within the past 6 months, now standing at roughly 5.5 million online bankers. (See Appendix 3) Looking at egg's 5-year report from 1996 to 2000 (See Appendix 4), egg's net interest has gone up and up and up from �1 million in 1996, up by �3.8 million when they reached 1997, and most noticeably, particularly after the 1998 period, up to �10.5 million when Prudential launched the Egg business (www.egg.com) in October 1998, which shows fantastically how well electronic commerce, along with the huge boost in home technology and internet access has effected the company. This is shown as in the next year they reached �22.4 million net interest income, and up to an incredible �80 million by 2000, showing a 761% increase since the introduction of the Internet to the company. Also what is quite noticeable is the amount of egg customers, and how quickly they increased, not surprisingly after the 1998 launch of egg (which stood at 155,353 customers) ...read more.

To conclude, I strongly believe the potential to reach a global audience, and the potential to leave your business open at all hours, all the time, is a fantastic advantage for any company to have, not to mention the other advantages, which clearly outweigh the disadvantages I already mentioned earlier. This tied in with the demand for new technology, and the seeming consumer hunger for better service, and more opportunity opens up an amazing amount of potential. I wish to fall back onto two statements, which I feel sums up the beliefs of e-commerce perfectly, but still shows that e-commerce is only the beginning of what's to come in the future, and is defiantly a possible standard to what the world might see in future businesses. "The appetite continues to grow for new and exciting innovations that are either already on the market or on the technological horizon. Consumers have developed a liking for the value and flexibility that digital technology affords them, and are becoming increasingly confident in the possibilities of transacting online." - Mark Nancarrow, Chief Operating Officer, Egg. "No other aspect of e-business has garnered more attention then that of e-commerce. After all, consumers are expected to spend roughly $180 billion online in the next four years" - Spokesperson, IBM e-business solutions. Charles Mallah Economics & Business Coursework ...read more.