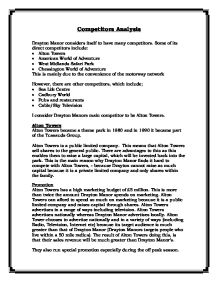 Drayton Manor - its competitors, and success.

Competitors Analysis Drayton Manor considers itself to have many competitors. Some of its direct competitors include: * Alton Towers * American World of Adventure * West Midlands Safari Park * Chessington World of Adventure This is mainly due to the convenience of the motorway network However, there are other competitors, which include; * Sea Life Centre * Cadbury World * Pubs and restaurants * Cable/Sky Television I consider Drayton Manors main competitor to be Alton Towers. Alton Towers Alton Towers became a theme park in 1980 and in 1990 it became part of the Tussauds Group. Alton Towers is a public limited company. This means that Alton Towers sell shares to the general public. There are advantages to this as this enables them to raise a large capital, which will be invested back into the park. This is the main reason why Drayton Manor finds it hard to compete with Alton Towers, - because Drayton cannot raise as much capital because it is a private limited company and only shares within the family. ...read more.

Price Alton Towers Main Prices Individual Off - Peak Standard Adult 12+ �21 �26 Child 4-11 �18 �21 Adult 12+ (2 day) �32 �36 Child 4-11 (2 day) �29 �31 OAP �14.50 �16 Disabled �10.50 �13 Disabled Helpers �10.50 �10.50 Family - 2 adults and 2 children �70 �78 Family 1 adult and 3 children �70 �78 Compared to Drayton Manor's prices, Alton Towers' prices are quite expensive. I believe that Alton Towers charges more for their tickets because they have higher running cost because they have more rides. Consumers may chose to go Drayton Manor because it is a lot cheaper. Alton Towers uses premium pricing which may lead consumers to believe that Alton Towers has higher quality products and services. This may make more customers want to go to Alton Towers. Conclusion In conclusion, Alton Towers is more successful in the marketing mix than Drayton Manor. This is because they can raise more capital through shares so it is able to spend more on the products and advertising and Drayton Manor because of their limited finance due to the fact their a private limited company and can only sell shares to family members. ...read more.