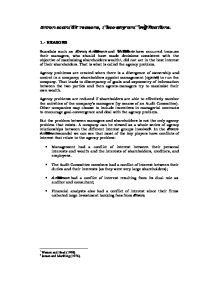 Enron scandal: reasons, discovery and implications. 1.- REASONS Scandals such as Enron, Andersen and WorldCom have occurred because their managers, who should have made decisions consistent with the objective of maximising shareholders wealth1, did not act in the best interest of their shareholders. That is what is called the agency problem. Agency problems are created when there is a divergence of ownership and control in a company; shareholders appoint management (agents) to run the company. That leads to discrepancy of goals and asymmetry of information between the two parties and then agents-managers try to maximise their own wealth. Agency problems are reduced if shareholders are able to effectively monitor the activities of the company's managers (by means of an Audit Committee). Other companies may choose to include incentives in managerial contracts to encourage goal-convergence and deal with the agency problem. But the problem between managers and shareholders is not the only agency problem that exists. A company can be viewed as a whole series of agency relationships between the different interest groups involved2. ...read more.

In the case of Enron, their partners were promised a huge return and Enron backed that promise with its own stock. To protect its escalating stock price and its reputation in the business community the company's books and financial reports were engineered to show inflated profits. Enron had borrowed billions of dollars to acquire additional energy companies but Enron didn't have the money to pay its lenders, although its books indicated otherwise. In reality, Enron was losing money daily, reducing its net worth by billions of dollars. Enron officials acknowledged that the company overstated its profits by more than $580 million since 1997. In October 2001, Enron disclosed a $638 million third-quarter loss, the Securities and Exchange Commission opened an investigation into the partnerships and the company's main rival backed out of an $8.4 billion merger deal. Enron filed for protection from creditors in December in the biggest corporate bankruptcy in U.S. history. Its stock, worth more than $80 before the collapse, felt to less than a dollar a share. ...read more.

Management has access to insider information that may use to make abnormal gains in the market if they are also shareholders. Top Enron executives cashed out more than $1 billion in company stock when it was near its peak. One potential solution would be to restrict the ability of directors to sell their stock while they are serving on the board of directors. The collapse of Enron is likely to remind the importance of ensuring complete and accurate financial disclosure and providing detailed information so that investors can properly assess a business. Similarly, risk plays a very important role in the decision-making process for both investors and companies, so it is important that the level of risk associated with investment can be accurately quantified. In the context of investment appraisal, risk refers to the business risk of an investment, which will increase with the variability of expected returns, although financial risk, which relates to the capital structure of the company, should also be considered. Fall-outs like Enron and WorldCom have demonstrated the importance of emphasizing the generally agreed idea that risk should be taken into account in the capital investment process. 1 Watson and Head (1998) 2 Jensen and Meckling (1976). 3 Watson and Head (1998) ...read more.