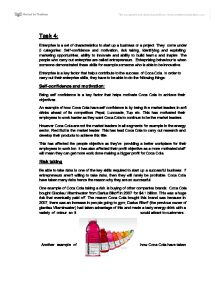 Task 4: Enterprise is a set of characteristics to start up a business or a project. They come under 5 categories: Self-confidence and motivation, risk taking, identifying and exploiting marketing opportunities, ability to innovate and ability to build teams and inspire. The people who carry out enterprise are called entrepreneurs. Enterprising behaviour is when someone demonstrated these skills for example someone who is able to be innovative. Enterprise is a key factor that helps contribute to the success of Coca Cola. In order to carry out their enterprise skills, they have to be able to do the following things: Self-confidence and motivation: Being self confidence is a key factor that helps motivate Coca Cola to achieve their objectives. An example of how Coca Cola have self confidence is by being the market leaders in soft drinks ahead of its competitors Pepsi, Lucozade, 7up etc. This has motivated their employees to work harder as they want Coca Cola to continue to be the market leaders. However Coca Cola are not the market leaders in all segments for example in the energy sector, Red Bull is the market leader. This has lead Coca Cola to carry out research and develop their products to achieve this title. This has affected the people objective as they're providing a better workplace for their employees to work ion. ...read more.

It is now called 'Coke Classic' This has affected Coca Cola's portfolio objective as they're providing a new product to their customers; widening their portfolio. However not Coca Cola's entire risk taking has lead to a profit. For example, Coca Cola had introduced Dasani Water. This was steadily making sales when researchers found in had contained bromide - a substance found in tap water. This led the researchers to believe the product was just tap water and as a result, the product has to be removed from the UK. This has affected their profit objective as the launching of the Dasani Water has caused Coca Cola to lose money due to it being withdrawn from some countries and people not buying it other countries due to its bad reputation. Identifying and exploiting marketing opportunities: Being able to identify and exploit marketing opportunities is an important skill for a business in order to be successful. An example of how Coca Cola have exploited a marketing opportunity is when the new film 'James Bond Quantum of Solace' released. The movie had made �11.4 million on its opening weekend of release and took more than �50 million at the British Box Office. Coca Cola had taken advantage of this by releasing the limited edition Coca Cola packaging based on the film. ...read more.

This was used to attract football fans from all around the world to buy their product. This worked because Coca Cola is a typical sports drink. Coca Cola have also introduced different coloured bottles to resemble the flavour of the drink. For example Coca Cola had made an orange bottle to resemble the Coca Cola orange flavour. This was used so that their customer could easily recognise what flavour the drink was without going up to it and reading it. Coca Cola have also introduced a few limited edition products for example Coca Cola Vanilla and Coca Cola with lime. These were used to widen their portfolio to their customers who enjoy the taste of coke. Being able to be innovative has affected their portfolio objective as they're providing more brands and beverage to their customers. It has also affected their profit objective as these promotions have meant more people have bought their products. Ability to build teams and inspire In order to get things done, the employees at Coca Cola have to work as a team. Being the market leaders in the soft drink market has meant the employees at Coca Cola have to work as a team to generate ideas and to carry out research. Inspiring the employees to work as a team has helped to motivate them which means they can get things done faster. This has affected their people objective as their employees are working as a team. They are also providing their employees with a great place to work in. ...read more.