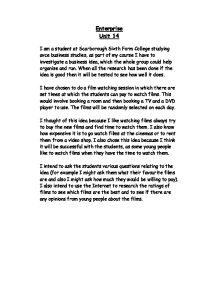 Enterprise - investigate a business idea - film watching session in which there are set times at which the students can pay to watch films.

Enterprise Unit 14 I am a student at Scarborough Sixth Form College studying avce business studies, as part of my course I have to investigate a business idea, which the whole group could help organise and run. When all the research has been done if the idea is good then it will be tested to see how well it does. I have chosen to do a film watching session in which there are set times at which the students can pay to watch films. This would involve booking a room and then booking a TV and a DVD player to use. The films will be randomly selected on each day. I thought of this idea because I like watching films always try to buy the new films and find time to watch them. I also know how expensive it is to go watch films at the cinemas or to rent them from a video shop. I also chose this idea because I think it will be successful with the students, as some young people like to watch films when they have the time to watch them. I intend to ask the students various questions relating to the idea (for example I might ask them what their favourite films are and also I might ask how much they would be willing to pay). ...read more.

However, if the business breaks even then it will survive and also it might start gaining more money through customers and making a profit. To have good advertising/promotion- this is important because good advertising will attract customers, which means the business might make a profit, which will help it to survive. To have a good reputation- this is important to the business because a good reputation means customers might keep coming back to the business (repeat business), also it might attract new customers to the business which would increase money coming into the business and this might mean there is an increase in profit. To survive- this is important because if the business does not survive then it will not be able to make a profit also it will not be able to attract new customers because the business will have ended. Primary research Primary research is where you gather the information directly. For example you might go to a supermarket and stand outside asking people questions, this would be primary research because the person has asked the respondents directly. The primary research that I will be doing is a questionnaire that will be handed out to students. From the questionnaire I hope to get information about the films students like, whether they are male or female, how much they would be willing to pay, how often they go to cinemas to watch films, if they would be interested in the service etc. ...read more.

Here is a chart to show the result. 5. Would you be interested in a movie watching session at college? - I asked this question because I wanted to know how many people would come to the movie watching sessions so that I knew whether it was a good idea or not. The results showed that more people would come to the sessions than wouldn't. Here is a chart to show the result. 6. How much would you be willing to pay? - I asked this question because I wanted to know what the price should be for the movie watching sessions if I decided to do them. The results showed the most of the people would be willing to pay �1 or less. Here is a chart to show the result. Conclusion- I think that the movie watching sessions is a bad idea because it would mean I would have to book a TV and a DVD player and this might interrupt the studies of other lessons and this wouldn't be very nice to other students because it could affect their grades and their grades are more important than a movie watching session. We would have to see the production company for a license to allow more than one person to watch the films and this would be expensive and we would never breakeven or make a profit. We would have to find the films that people like and hope it doesn't last longer than their free period or they wouldn't be happy. ...read more.