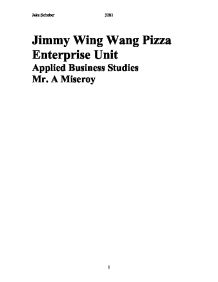 Jimmy Wing w**g Pizza Enterprise Unit Applied Business Studies Mr. A Miseroy Introduction For the enterprise unit, we have to organise and run a business for 5 days in order to run the business we first had to come up with an idea of what we were going to do. After coming up with a few initial ideas like pizza and shwarma we decided that to make the business more successful and popular we would be better of selling soft drinks with the food. After finding out more information and all the details, we found out that shwarma's won't be a good idea as we will either need to rent a portable machine one of the places and also we will need to hire some one to run it, this means that it will be expensive and we might not cover the costs. There was a problem with the pizza's as well, due to the times of the breaks most of the popular pizza places that we were thinking of did not open up till later so we had to find a pizza place that opened at 10:00-10:30am, so the pizza's will be cooked and deliverd to the school for between 11 and 11.10am. this was important because the pizzas needed to be delivered before second break had started because the pizzas needed to be sorted out and ready to be sold to the students and staff of Doha college. After we had looked around at the different pizza businesses in Doha we found the ideal pizza place to buy our pizzas from, which was Pizza Inn. This is because the premises is close to Doha College and also Pizza Inn is a well known pizza store and has a good name within the local and surrounding areas. The group finally decided that this is an ideal pizza store to use but we would not get the soft drinks supplied from here due to the extra cost which we would be charged. ...read more.

= 2980QR 2980-(480*5) = Jake 150+480=630 Juan 150+480=630 Charlotte 150+480=630 Toby 150+480=630 Matthew 150+480=630 Business department 580 =580 = 3730QR Staff Evaluation: Matthew: I feel as though Matthew put a lot of effort into the business but became a bit to enthusiastic at times and tried to over rule Juan in his decisions. I feel he contributed well and pulled his weight in this assignment. Toby: I think that Toby did put quite a bit of effort in although lacking at times when we were actually running the business he contributed well. Charlotte: I think that Charlotte played a big part in running the business helped organise meetings and the supplies which we needed in order to run the business. Juan: played one of the biggest parts in running our mini enterprise unit. He organised the advertisements and also helped me with the running of the staff and the organisation of our human resources. Also he was the business manager and also helped organise some of the meetings. Jake(me): I think that I did well in pulling my weight and contributing to the business although at times I didn't put my full effort into the business I think I still managed to do well in doing my designated jobs and roles. Every day I got out early from class so I could go and help set up the business. Also I contributed to the posters which juan designed through giving him ideas. In conclusion to this task I believe that our business was very successful the short amount of time it ran for. It made us realise how much organisation there is in staring up your own business. We found that there was a lot of organisation and our business was only designed to last for 5 days maximum. I think that the business was not only successful financially but also in the day to day running. I believe that we cooperated with each other quite well. ?? ?? ?? ?? Jake Schober 3281 1 ...read more.