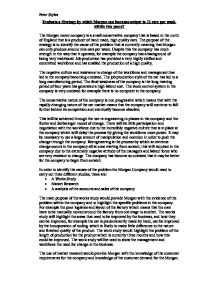 Evaluate a Strategy by which Morgan can increase output to 12 cars per week within two years?

Evaluate a Strategy by which Morgan can increase output to 12 cars per week within two years? The Morgan motor company is a small conservative company that is based in the north of England that is a producer of hand made, high quality cars. The purpose of the strategy is to identify the cause of the problem that is currently meaning that Morgan can only produce around nine cars per week. Despite this the company has much strength in the way that it operates, for example the company has a background of being very traditional. Job production has provided a very highly skilled and committed workforce and has enabled the production of a high quality. The negative culture and resistance to change of the workforce and management has led to the company becoming outdated. The job production style of the car has led to a long manufacturing period. The final weakness of the company is the long training period of four years has generated a high labour cost. The stock control system in the company is very outdated for example there is no computer in the company. The conservative nature of the company is non progressive which means that with the rapidly changing nature of the car market means that the company will continue to fall further behind its competition and eventually become obsolete. ...read more.

These changes are less extreme so are unlikely to create conflict with the workforce as the only thing being changed in bringing in more labour and adjusting the layout of the factory to prevent the car having to be moved long distances from one stage of production to the next with will save time and money for the business. This will allow the workforce to continue to manufacture the car in the same way, until the implementation of the second phase. The benefits to the business of using ancillary workers are, firstly the ancillary workers could be used to do the jobs that the skilled workers do not need to do for example moving the cars around the factory. The use of these workers would enable the trained workers to concentrate on their specific role within the business for example making the car panels etc. The ancillary workers would not need to be trained as heavily as the rest of the workforce which would allow time and money to be saved from not having to go through the lengthy training process. In the first phase a computerised JIT stock control system will need to be introduced into the company in order to reduce the level of work in progress around the factory. ...read more.

The change would require a large amount of finance to pay for the new tooling and equipment, which would have an impact on the resources available. However the change would enable the Morgan Company to become more up to date and increase the profit margins of the business. The re engineering process would need to be predominantly conducted with the production and planning director of the business as he seems to be the only person within the company, who sees that change is required in the company to improve the production output. The remainder of the employees and the management of the company are very conservative and resistant to any change in the company. In terms of the long term objectives of the business I believe that the strategy will enable Morgan to increase its sales revenue and profits as they should be able to produce 12 cars per week, however it would be unlikely to achieve the level of output within two years as the employees would need to be trained in operating the machinery and due to the negative nature of the company once the change has been pushed through they are likely to continue to produce the car the same way. In terms of resources of the company a large amount of finance would be required for the business to pay for the production layout and tooling. Peter Styles ...read more.