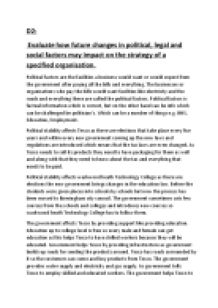 Evaluate how future changes in political, legal and social factors may impact on the strategy of Tescos.

﻿D2: Evaluate how future changes in political, legal and social factors may impact on the strategy of a specified organisation. Political factors are the facilities a business would want or would expect from the government after paying all the bills and everything. The businesses or organisations who pay the bills would want facilities like electricity and the roads and everything these are called the political factors. Political factors is factual information which is correct, but on the other hand can be info which can be challenged be politician?s. Which can be a number of things e.g. NHS, Education, Employment. Political stability affects Tesco as there are elections that take place every five years and within every new government coming up the new laws and regulations are introduced which means that the tax laws are even changed. As Tesco needs to sell its products they need to have packaging for them as well and along with that they need to know about the tax and everything that needs to be paid. Political stability affects washwood heath Technology College as there are elections the new government brings changes in the education law. Before the students were given places into schools by schools but now the process has been moved to Birmingham city council. The government sometimes cuts few courses from the schools and colleges and introduces new courses so washwood heath Technology College has to follow them. ...read more.

It even depends on how washwood heath Technology College is allowed to compete with other businesses. Washwood heath Technology College has to follow any law they have to be answerable to the government for that and in case of breaking the law a penalty can be charged to them. Social factors are the changes that take place in society within the time which are relevant for business organisations, such as in demographic issues, changes in structure, household and families, education, attitudes to work, religions, attitudes to male and female roles and ethics. Social factors are demographic (population) issues which is when the population of a country is growing, changes in structure which is an increase of old people in Britain, household and families which the rise in single-person households, education which is the level of education of the workforce, attitudes to work which is attitudes to work which influence the important relationships between a business and its employees, religions which is the different religious groups which different countries belong to, attitudes to male and female roles which is the roles of males and females in society and the change over the last fifty years and ethics which are the values and principles held by those that run businesses. Demography has an effect on Tesco as it increases the demand for goods and services which then Tesco provides. It has an effect on Washwood Heath Technology College as if there?s a low amount of babies being born there would be a decrease in schools. ...read more.

With contract law I assume that in future Tesco would not take any temporary employees. They would want to recruit staff for long time instead recruiting any sort of staff for the summer vacations. Tesco might tell their staff to do extra work or they might recruit certain staff that is very well trained and has specific experience within that job and has the right qualifications required. With competition law I expect the future government to stop sharing the sales information on internet that might be hard for Tesco to compete other organisations especially when they might not even know what sort of competition they have got with their competitors. The criminal penalties can become stricter. The court might even have the authorities to disqualify the company directors. In the future five years the changes in the social factors can be that it would be compulsory in Tesco to sell halal food separately and the harram food separately. The government might get stricter with recycling things properly and getting rid of them. The government might get strict with recycling the things. Anyone who disrespects the employers can get kicked out of the job there and then. The government can get strict with the laws. In the future the government might not provide people with the free education facility the one they have. The government might make education compulsory and not provide it free. Every person might have to pay for it. ...read more.