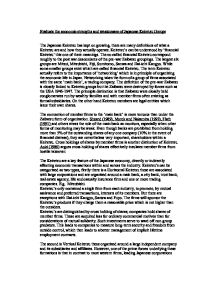 Evaluate the economic strengths and weaknesses of Japanese Keiretsu Groups.

Evaluate the economic strengths and weaknesses of Japanese Keiretsu Groups The Japanese Keiretsu has kept on growing, there are many definitions of what a Keiretsu are and how they actually operate. Keiretsu's can be understood by 'financial Keiretsu' this one of there meanings. The so-called financial Keiretsu correspond roughly to the post war descendants of the pre-war Zaibatsu groupings. The largest six groups are Mitsui, Mitsubishi, Fiji, Sumitomo, Sanwa and Dai-ichi Kangyo. While some smaller groups exist which are called financial Keiretsu. The term Keiretsu actually refers to the importance of 'networking' which is in principle of organizing the economic life in Japan. Networking takes the form of a group of firms associated with the same 'main bank', a trading company. The definition of the pre-war Zaibatsu is closely linked to Keiretsu groups but the Zaibatsu were destroyed by forces such as the USA 1946-1947. The principle distinction is that Zaibatsu were closely held conglomerates run by wealthy families and with member firms often existing as formal subsidiaries. On the other hand Keiretsu members are legal entities which issue their own shares. The connection of member firms to the 'main bank' is more tenuous than under the Zaibatsu form of organization. Sheard (1989), Morck and Nakamira (1992), Flath (1991) and others stress the role of the main bank as monitors, especially when other forms of monitoring may be weak. ...read more.

In 1992, the intragroup transactions involve the trading companies, according to the JFTC. With ties tens of thousands of Japanese companies, including Keiretsu, the trading companies play a significant role in Japan's exports and imports, including domestic distribution activities. They are essentially gate keepers for Japan's economy. The trading companies, along with the banks and insurance companies, provide both horizontal and vertical leadership and integrating functions to the Keiretsu. They provide key services to Japanese firms operating overseas, including those in Asia, and facilitate trade between third-party countries. By maintaining strong linkages between firms, the trading companies serve important intermediaries among local suppliers, parent companies, and customers in Japan. Companies belonging to a Keiretsu have benefited from the occasional pooling of capital, technological knowledge, personnel, office space and recreational facilities. This has proved to be particularly useful when member firms have entered into joint ventures with each other, for by dealing with fellow Keiretsu firms, one starts off on the basis of long held associations which facilitate negotiations and cooperation. Information can be freely exchanged with full confidence. Loans can be readily be arranged through the group's main bank and other financial institutions, and the Keiretsu's major trading company can be called upon for assistance in distribution and the acquisition of imported inputs. On average horizontal Keiretsu firms appear to be not profitable than non- Keiretsu ones. ...read more.

Japanese companies remain specialised for two quite different reasons. They cannot merge or takeover companies which are doing well in other industries because shares in companies are not treated like financials assets as they are in Britain or the U.S. So conglomerate companies are unheard of. The inability to diversify by takeover, and the stress in Japanese companies on ensuring the survival of the community within them rather than maximizing shareholders' returns, forces a powerful discipline on each firm. It must compete and survive in its own field. That has given managers two main aims. One is to ensure profitability, but mainly on operations not on assets or capital employed. The other aim is to anticipate the end of the useful life of one successful product by developing its successors. The potential behavioural differences between affiliated and independent firms in Japan were explored. The primary behavioural implication of interest was that of potentially more risk-averse behaviour on the part of managers of affiliated firms. That is, on of the functions of group affiliation often cited in the literature is the insulation of mangers from hostile takeover. To the extent that such managers are risk averse, this insulating effect is supposed to allow for more stable management of the firm. However, those arguments are problematic because affiliation is so widespread in Japan. It therefore becomes difficult to clearly identify affiliated versus independent firms. If this is true that performance of affiliated firms is more stable, but dampened relative to that of independent firms. ...read more.