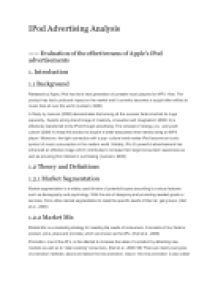 Evaluation of the effectiveness of Apple's iPod advertisements

IPod Advertising Analysis -- Evaluation of the effectiveness of Apple's iPod advertisements 1. Introduction 1.1 Background Released by Apple, iPod has led a new generation of portable music players for MP3-files. The product has had a profound impact on the market and it currently becomes a sought after artifact to music fans all over the world. (Larsson, 2008) A Study by Larsson (2008) demonstrates that among all the success factors behind its huge popularity, 'Apple's strong brand image of creativity, innovation and imagination' (2008: 2) is effectively transferred to the iPod through advertising. The concept of 'energy, joy and youth culture' (2008: 4) helps the product to acquire a wider association than merely being an MP3 player. Moreover, the tight connection with a pop-culture trend makes iPod become an iconic symbol of music consumption in the modern world. Notably, iPod's powerful advertisement has enhanced an effective image which contributes to increase their target consumers' awareness as well as arousing their interest in purchasing. (Larsson, 2008) 1.2 Theory and Definitions 1.2.1 Market Segmentation Market segmentation is a widely used division of potential buyers according to various features such as demography and psychology. ...read more.

At the release of iPod, the product foundation consumers were mainly Macintosh users, however, Apple still attempted to 'break new ground' (Larsson, 2008: 25) in the youth market. Hence, on the stage of introduction, iPod intended to gain its market position through heavy advertising. As a consequence, the heavy advertising had a significant impact on iPod's target audiences and contributed to iPod's rapid growth in selling on the following stage. 4.2 Market Segmentation Both demographic and psychographic segmentations are utilized by Apple to reach their consumers. Segmented demographically by age, iPod advertisements target on what is believed to be the most potential consumers-the youth (Larsson, 2008), who are at the age of fifteen to thirty. (Shiqing, 2009) Furthermore, psychographic segmentation is used in the iPod advertisements to meet young people's attitudes toward their culture. For instance, the Hip-Hop culture, which has a trend-setting impact on adolescents, was utilized to its limit in the iPod advertisement. The dark silhouettes are listening to Hip-Hop music using a distinct white iPod and dancing in a random and dynamic style. As Levies (2007) suggested, 'The stark images of the iPod dancers have really burned themselves into your brain.' ...read more.

It is the unique brand image that enables iPod to be a cultural icon among the youth. In the advertisement, all-white iPod stands out in the dark silhouettes as a naturally wonderful object. Together with bright background color and dynamic movements, the concept of energy, joy, style and young culture was strongly connected with iPod as well as Apple's brand image. Consequently, Apple's brand associations, brand awareness and brand loyalty are reinforced. This is how advertising makes the product become an icon of contemporary culture as well as a symbol for the new consumption pattern of music in modern society. Most importantly, it is the effective advertisements that contribute to the unique brand image of Apple and consequently increase the interest of their target segment. 6. Recommendation Despite using silhouettes, movements and colors to distinct the feature of iPod, there appears to be no slogan in the advertisement that appeal to the target audience. Based on the demerit above, it is recommended that a slogan should be created to attract and retain the iPod consumers as well as establishing a unique position in the market. Furthermore, a powerful slogan may contribute to Apple's brand image and enhance its competitive advantages. 7. ...read more.