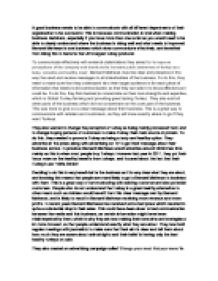 Evaluation of types of business communications with examples from Bernard Matthews, Vodaphone and Primark.

A good business needs to be able to communicate with all different departments of their organisation to be successful. This is because communication is vital when making business decisions, especially if you have more than one outlet as you would need to be able to clearly understand where the business is doing well and what needs to improved. Bernard Mathews is one business which does communicate effectively, and benefited from doing this to become the UK's largest turkey producer. To communicate effectively with external stakeholders they aimed to 'to improve perceptions of the company and brand and to increase public awareness of turkey as a tasty, versatile and healthy meat'. Bernard Mathews must be clear and presence in the way the send and receive messages to all stakeholders of the business. To do this, they need to make sure that they understand who their target audience is for each piece of information that needs to be communicated, so that they can tailor it to be as effective as it could be. To do this, they first decided to concentrate on their core strengths and expertise, which is 'British Turkey farming and providing great tasting Turkey'. They also sold all other parts of the business which did not concentrate on this core part of the business. This was done to give out a clear message about their business. This is a great way to communicate with retailers and customers, as they will know exactly where to go if they want Turkeys. ...read more.

Communication will not be successful if the recipient is unable to understand due to the information not being clear. Vodafone takes certain steps to make sure that their communication is clear so that they are successful in getting their message across. To help achieve this, they have come up with a set of 10 business principles. One of these principles directly relates to communication, which says: 'We will communicate openly and transparently with all of our stakeholders within the bounds of commercial confidentiality'. The fact that one of their ten business principles is all about communication tells us how much Vodafone consider communication an important aspect of business. As Vodafone has over 15million customers, they need to make sure that they can communicate effectively with them and try to solve any issues that their customers may have, as not doing so could result in them losing their customers. Vodafone currently has over 200 stores in the UK alone in which there are trained customers service employees available for customers to go in store and deal with any issues or ask any questions about the company, services or products that they are selling. They also have a large number of employees in call centers available for customers to call in ad communicate with staff, which has all the benefits that the inn store customer services provide. As this is a verbal way of customers communicating with Vodafone, it is likely to be very effective. ...read more.

Primark did claim that they will investigate the situation and penalize any manufacturer taking part I such activities, but there was no evidence shown to customers that this actually happened, as they were being very dismissive about the situation. This way of communicating with customers, the public and the media is not very effective at all, and can be more damaging than saying anything at all. If people are unclear as to what Primark's response was to the allegations, then they are not communicating with their customers effectively. Instead, they are making things worse for themselves, as not producing effective information about the whole matter is likely to raise suspicions, which it did. Instead of communicating the way they did, they should have carried out a full investigation as to what was going on in their manufacturing sector, and clearly reported their findings, along with their solutions to the public and to their customers, to try and gain customers back. Another way in which this business fails in communication is through their website. Most clothes outlets now have an online store, or at least show through images what they are selling in stores. Primark fails to do both of these, so it is unclear what types of clothes Primark actually sells, especially to those who have ever been into one of their stores. The more effective approach would be to sell clothes online, or at least shows images of their rages so people can clearly understand what Primark sells. ...read more.