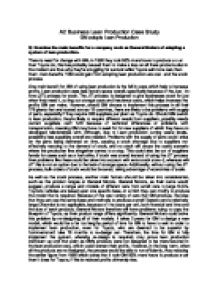 Examine the main benefits for a company such as General Motors of adapting a system of lean production.

A2 Business Lean Production Case Study GM adopts Lean Production Q: Examine the main benefits for a company such as General Motors of adapting a system of lean production. There is need for change with GM, in 1998 they took 50% more hours to produce a car than Toyota do, this has probably caused them to make a loss on all there products also in the modern era thus why they're struggling for survival while Toyota sell more cars than them. main benefits TGM could gain from adopting lean production are cost and the stock process One main benefit for GM of using lean production is the fall in costs which help to increase profits. Lean production uses less factory space overall, specifically because of the Just-in-time (JIT) process for stock. The JIT process is designed to give businesses stock for just when they need it, cutting out storage costs and insurance costs, which helps increase the profits GM can make. ...read more.

Toyota's vehicles are based upon one specific base, in which they can modify to produce the model that is required. Because of the vast variety of cars that GM produce, the idea that they can use the same base and methods to produce a small Daewoo and a relatively large Chevrolet is not applicable, because of the costs per unit, both financial and time and the size of each products. General Motors therefore will have problems trying to copy the blueprint of Toyota, as their product range differs significantly. General Motors could solve this problem by re-designing all of their models. It takes 3 years for GM to design a new model, which would be a far too lengthy period of time for GM to have to wait in order to implement lean production, even for Toyota, who are deemed to be superior by 'commentators' take 18 months to re-design car. Therefore, the time for GM to fully implement the system, whereby re-design is required, may prove lean production inefficient up until that point as GM's products were not designed to be manufactured in the lean production way, which could worsen their profits. ...read more.

When all runs smoothly, and good communication is kept between suppliers and the businesses, this option is the best bringing more profit in. However, there are vast amount of problems that could stop this from happening, it is unlikely that GM, like Toyota, has all of its suppliers at there plants within a half a days drive, especially if new suppliers are needed. Overall, I don't think GM would benefit from lean production for many years at least should they adapt it. Because of the economic climate, the costs would be far too high to re-design the products, which is essential for lean production to work efficiently, by the time the process could become profitable, the demand for oil/ fuel powered cars could be minimal. I believe GM should focus more on the future of the market for cars, and try to adopt an alternative plan for their future approach. They would possibly look into electric cars, to follow the trend of other major car manufacturers, and by doing this, I then believe a lean production approach would benefit, as re-designing would need to be done in either way. ...read more.