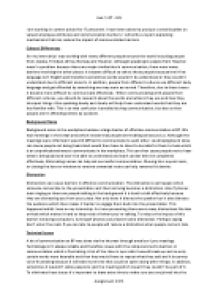 Explain mechanisms that can reduce the impact of communication barriers

Transfer-Encoding: chunked ﻿Unit 1 ICT - M1 I am working in careers advice for IT personnel. I have been asked to produce a small booklet on valued employee attributes and communication barriers. I will write a report explaining mechanisms that can reduce the impact of communication barriers. Cultural Differences On my internship I was working with many different people around the world including people from, Alaska, Trinidad, Africa, Norway and Houston. Although speaking to people from Houston wasn?t a problem because there are major similarities in communication, there were many barriers involving the other places. It became difficult to talk to these people because their first language isn?t English and therefore sometimes words wouldn?t be understood or they couldn?t understand due to different accents. In addition, people from different cultures use different body language and get offended by something we may seem as normal. Therefore, due to these issues it became more difficult to communicate effectively. ...read more.

This happened whilst I was on my internship. As I was presenting there were many distractions like late arrivals which makes it hard to keep track of where you?re talking. To reduce the impact of this barrier removing computers, turning of phones can prevent some distraction. Perhaps saying don?t enter the room if you are late to people will reduce a distraction when people come in late. Technical Issues A lot of communication at BP was done via the internet through emails or Lync meetings. Technology isn?t always reliable and therefore issues with the computers led to barriers in communication which is frustrating. A lot of the time in Lync calls it would break up and so only certain words were hearable and then they would have to repeat what they said and it becomes to be frustrating because it will take more time that could be spent doing other things. In addition, sometimes it wouldn?t allow people to join the meeting which meant they couldn?t be part of it. ...read more.

Terminology In BP acronyms were used constantly. I didn?t understand most of them and therefore the whole conversation didn?t make any sense and I couldn?t contribute or use that information in my work to because I just didn?t understand. To overcome this BP had a dictionary online which told you every acronym or asking a team member what is means will overcome this barrier. Spelling and Grammar When spelling and grammar is incorrect it can have a negative effect on communication. When it comes to written communication, spelling is very important. If there is text that has incorrect spelling then it can be hard to understand what it means, resulting in failed communication. For large text it?s important for grammar to be correct. Bad grammar can make it hard to understand also. In written communication, using spell-check will ensure that all the spelling is correct. This means that the readers can understand full what is trying to be said. Also, reading over the work or getting close work friends to read it will reduce this barrier. Assignment 1 M1 ...read more.