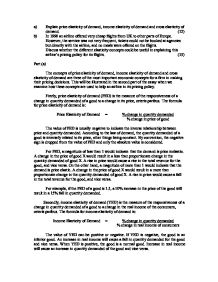 Knowing the income elasticity of demand would enable the airline to predict changes in demand as the consumers' income changes. However, in this case, the airline appears to be in a position to benefit whether consumers' income rises or falls. Since the airline offers very basic services, it may be considered as an inferior good. If the income of consumers falls, passengers who were previously travelling by first class and business class may downgrade to economy class and the demand will rise. This can be seen during a recession when many companies try to cut down on their expenses by forcing their executives to travel by economy instead of first or business class for shorter regional trips. On the other hand, if the economy improves, budget travellers and backpackers who previously used to travel by bus or train may consider upgrading and travel by airplane instead. It seems that this airline has considered all three elasticities carefully in the pricing of its fares as well as the type of services it is offering. By undercutting its competitors, it gained a significant amount of the market. However, it needs to constantly monitor its competitors' prices as well the growth of the economy to prepare itself for changes in demand in the future. It also needs to work with other service providers like hotels and car rental firms in order to increase its market share. ...read more.