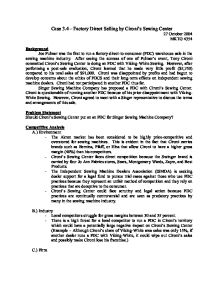 Case 3.4 - Factory Direct Selling by Cironi's Sewing Center 27 October 2004 MKTG 4354 Background Joe Fulmer was the first to run a factory-direct-to-consumer (FDC) warehouse sale in the sewing machine industry. After seeing the success of one of Fulmer's event, Tony Cironi committed Cironi's Sewing Center to doing an FDC with Viking-White Sewing. However, after performing a post-sale evaluation, Cironi learned that he made very little profit ($5,750) compared to his total sales of $91,000. Cironi was disappointed by profits and had begun to develop concerns about the ethics of FDCS and their long-term effects on independent sewing machine dealers. Cironi had not participated in another FDC thus far. Singer Sewing Machine Company has proposed a FDC with Cironi's Sewing Center. Cironi is questionable of running another FDC because of his prior disappointment with Viking-White Sewing. However, Cironi agreed to meet with a Singer representative to discuss the terms and arrangements of this sale. Problem Statement Should Cironi's Sewing Center put on an FDC for Singer Sewing Machine Company? Competitive Analysis A.) Environment - The Akron market has been considered to be highly price-competitive and overstored for sewing machines. ...read more.

- Adding sewing machine lines (especially the higher-priced brands) has opened up new markets, fueled sales growth, and increased market share for Cironi's Sewing Center. Finance - Cironi's Sewing Center held an estimated 15% share of Viking-White's 12% share of Akron area sewing machine sales prior to the Viking-White FDC. - Though sales totaled $87,000, Cironi's profit from the Viking-White FDC was only $5,750. - Cironi's Sewing Center's total store sales from June 1988 to May 1989 are $431,176. - Without a balance sheet for 1988 or 1989, I am unable to calculate any profitability, liquidity, or activity ratios for Cironi's Sewing Center. Strategic Alternatives and Discussion 1.) Cironi's Sewing Center prepares and executes a FDC for Singer Sewing Machine Company. Benefits of Alternative #1 - Singer will supply and deliver a large number of machines on consignment to the warehouse sale site without charge. - The FDC could prove very profitable. Costs of Alternative #1 - Cironi would have to make all the arrangements for renting the warehouse, advertising the sale, finding area dealers who were willing to work the sale on commission, setting up and dismantling the sale and whatever else needs to be done in preparation for the event. ...read more.

In addition, Alternative #3 (Cironi's Sewing Center diversifies into new merchandise areas including small appliances, ceiling fans, electronics, and stereo equipment) would be far too expensive for Cironi to implement at this stage in his business. I do not think that Cironi has enough capital invested to venture out into a whole new line(s) of business. Therefore, I recommend that Cironi chooses Alternative #2: Cironi rejects Singer's proposal and continues to do business as usual. At this point, I think this is the safest option for Cironi's Sewing Center. For one, because the Viking-White FDC had undesirable effects on overall sales and profits and because Singer has a smaller margin, it is only expected that the Singer FDC will do just as well as the Viking-White FDC or worse. In addition, Cironi does not want to have a successful Singer FDC that could devastate future sales of other brands that give Cironi higher profit margins. Cironi also has to think about the ethics involved with FDC's and evaluate whether or not it is worth being scrutinized by the Independent Sewing Machine Dealers Association and possibly having a tarnished reputation in the industry. In my opinion, Cironi should stabilize volume and concentrate on improving profitability and cash flow with ALL the brands that he carries. ...read more.