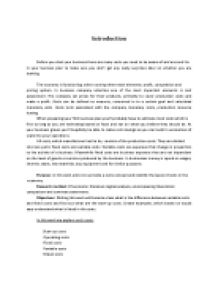 ﻿Introduction Before you start your business there are many costs you need to be aware of and account for in your business plan to make sure you don't get any nasty surprises later on whether you are starting. The economy is functioning, when running three main elements: profit, competition and pricing system. In business company activities one of the most important elements is cost assessment. The company set prices for their products, primarily to cover production costs and make a profit. Costs can be defined as resource, consumed in to a certain goal and calculated monetary units. Costs term associated with the company monetary costs, production resource buying. When preparing your first business plan you'll probably have to estimate most costs which is fine so long as you are estimating based on facts and not on what you believe they should be. As your business grows you'll hopefully be able to make cost savings as you can build in economies of scale into your operations. All costs, which manufacturer had to do, consists of the production costs. They are divided into two parts: fixed costs and variable costs. Variable costs are expenses that change in proportion to the activity of a business. Meanwhile fixed costs are business expenses that are not dependent on the level of goods or services produced by the business. In businesses money is spend on wages, interest, taxes, raw materials, buy equipment and for similar purposes. Purpose: in this work aims is to provide a costs concept and identify the types of costs in the economy. Research method: Of economic literature logical analysis, encompassing theoretical comparison and summary statements. Objectives: Writing this work will become clear what is the difference between variable costs and fixed costs and find out what are the start-up costs. Create examples, which based on would easy understand what is listed in the costs. In this work we explore such costs: Start-up costs Operating costs Fixed costs Variable costs Mixed costs Contents Introduction 1. ...read more.

It is separated into three main types of costs: Fixed costs Variable costs Mixed costs Information about behaviour cost is very important, in making management and economic decisions behavior cost is very important, in making management and economic decisions, such as, how many of the productions expected to produce, whether it is worth to reduce products prices, to aim increase sales volume. How to be paid for employees of sales department; paying commissions, the base salary or a combination of these for methods, whether it is worth buy new equipment, to aim increase production volume and others. Analyse the fixed and variable costs is especially important, solving the continuity and increasing of production problems, because the variable costs formed only then, when produced output, while fixed costs will be the same at hundred present and at zero present of produce volume level. Fixed and variable costs distribution especially important their control. Variable costs must be controlled taking in activities level, while fixed- in time. 3.1 Fixed costs Fixed costs- fixed costs are business expenses which level is constant and independent of output, and which don't change, than changes in production volumes. They remain constant for the production increase, decrease or even in his absence. Fixed costs can be attributed to sales costs, indoor lighting costs, heating, administration, depreciation of facilities, premises for rent, insurance, wages management of staff, accountancy costs, marketing costs, and other costs, which don't change, than changing production volume. For example, catering business rent payment for premises and use for equipment payment will be fixed costs, which don't change and independent of the output. Although the fixed costs its essence is independent of production volume. But they can change, but not because are changing production volume, but for other reason. For example, due for inflation increase, the catering premises expenditure coming years can increase. However, the current year rent costs are independent of the numbers of visitors. ...read more.

variable per units costs, X- Units 3.4 Graph Analyse Fixed, variables costs graph: Graphically, the total fixed cost looks like a straight horizontal line while the total variable cost line slopes upward. The graphs for the fixed cost per unit and variable cost per unit look exactly opposite the total fixed costs and total variable costs graphs. Although total fixed costs are constant, the fixed cost per unit changes with the number of units. The variable cost per unit is constant. When cost behavior is discussed, an assumption must be made about operating levels. At certain levels of activity, new machines might be needed, which results in more depreciation, or overtime may be required of existing employees, resulting in higher per hour direct labor costs. The definitions of fixed cost and variable cost assume the company is operating or selling within the relevant range (the shaded area in the graphs) so additional costs will not be incurred. Mixed costs graph: To analyze cost behavior when costs are mixed, the cost must be split into its fixed and variable components. Several methods, including scatter diagrams, the high-low method, and least-square regression, are used to identify the variable and fixed portions of a mixed cost, which are based on the past experience of the company. COST OF PRODUCTION FORECAST EXAMPLE First year: Start-up costs Premises installation: Wall painting–£300-£1000 Ceiling whitewashing – £200-£900 Flooring – £400-£1000 Door – 5 X £400-£1000 Exterior door – £600-£1300 Electrical installation – £150-£300 Total: £3650-£8500 Operating costs Fixed costs Administrative and management costs: Premises: The total area: 50 - 250m , one square per meter rent £28. Total: £16800-£84000 Employees’ salary: Director – £5000-£8000 Deputy Director – £2500-£4500. Employees – £1000-£2500. Total: £102000-£180000 Insurance costs: Social insurance of 30% from amount of salary, Total: £30600-£54000 Insurance costs 0.25% per annum from value of the buildings. Variable costs Utilities: (Change price in line with the cost of energy price, price could go up or down). Electricity –£37 Gas – £63 Total: £1200 ...read more.