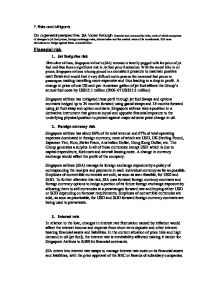 F. Risks and Mitigants On a general perspective, SIA faces through financial and commodity risks, such of which comprises of changes in jet fuel prices, foreign exchange rates, interest rates and the market value of its investments. SIA uses derivatives to hedge against these vulnerabilities. Financial risk 1. Jet fuel price risk Like other airlines, Singapore airline's (SIA) revenue is heavily pegged with the price of jet fuel and thus faces a significant risk in Jet fuel price fluctuation. With the recent hike in oil prices, Singapore airlines is being placed in a consistent pressure to maintain positive cash flows and would find it very difficult not to pass on the increased fuel prices to passengers making travelling more expensive and thus leading to a drop in profit. A change in price of one US cent per American gallon of jet fuel affects the Group's annual fuel costs by US$15.1 million (2006-07:US$15.2 million) Singapore airlines has mitigated these peril through jet fuel Swaps and options contracts hedged up to 24 months forward using gasoil swaps and 18 months forward using jet fuel swap and option contracts. Singapore airlines take a position in a derivative instrument that gives an equal and opposite financial exposure to the underlying physical position to protect against major adverse price change in oil. ...read more.

SIA has its largest investment in financial which account to 76% (appendix ann report pg 149) of its overall financial assets. With this, there could be a chance that the counterparty would default on its payments due to unforeseen circumstances like for travel agencies which high profits occur in a cyclical period due to holiday seasons. These risks are being mitigated by limiting the aggregated exposure on all outstanding financial instruments to any individual counterparty, taking into account its credit rating and adjusting as necessary thus mitigating the non-performance by these counterparties. SIA monitors and constantly reviews the economic exposures like country and industry it is in and the credit rating of its counterparties. 5. Liquidity Risk SIA has cash and short-term deposits amounting to $5,119.0 million, $5,117.6 million as of 2007 and available short-term credit facilities of about $200 million, 880.6 million as of 2007. With these holdings of cash and short-term deposits, together with committed funding facilities and net cash flow from operations, these cash is expected to be adequate to provide the cost of all firm aircraft deliveries outstanding in the subsequent financial year. If there is an occurrence of a shortfall, it would be met by bank borrowings or public market funding. ...read more.

Singapore Airlines hope to be able to charge premium price and increase utilization through this strategy. Unforeseen Risks One prevalent risk that all airlines including SIA face is terrorism. In this volatile world, airlines still continue to be a target for terrorism and have an adverse economic effect on the airlines like SIA, like the 9/11 situation in the United States, air travel declined causing a 20% cutback in air travel capacity thus affecting profit. If our bank were to attach cash as collateral, we might have to wait longer or for the industry to improve. Singapore's government has taken up measures to heighten up the security in airports and on board aircrafts. Other types of risks Singapore airline face are air borne diseases which as an effect on travel especially to affected countries. One example would be the Severe Acute Respiratory Syndrome (SARS), which had undermined air travel as well as defence spending in most of the world. And global war which would also affect Singapore airline adversely. One major risk Singapore airlines is exposed to is an economic recession where in this volatile economy where prices of goods and services are rising, consumers mainly tourists would find flying overseas less affordable thus causing demand to fall. Other kinds of financial risk would be the credit rating, revenue management and changes to tax laws in Singapore which would affect the overall company's image and profitability. Appendix ...read more.