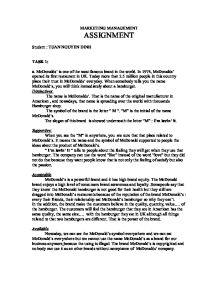 Flow chart shows the distribution chain for liquid milk from the cow to the consumers.

MARKETING MANAGEMENT ASSIGNMENT Student : TUAN NGUYEN DINH TASK 1: a. McDonalds' is one of the most famous brand in the world. In 1974, McDonalds' opened its first restaurant in UK. Today more than 2.5 million people in this country place their trust in McDonalds' everyday. When somebody tells you the name McDonald's, you will think immediately about a hamburger. Distinctives: The name is McDonalds'. That is the name of the original manufacturer in American , and nowadays, that name is spreading over the world with thousands Hamburger shop. The symbol of the brand is the letter " M ". "M" is the initial of the name McDonald's. The slogan of this brand is showed underneath the letter "M" : I'm lovin' it. Supportive: When you see the "M" in anywhere, you are sure that that place related to McDonald's. It means the name and the symbol of McDonald supported to people the ideas about the product of McDonald's. " I'm lovin' it " tells to people about the feeling they will get when they use that hamburger. The company can use the word "like" instead of the word "love" but they did not do that because they want people know that is not only the feeling of satisfy but also the passion. ...read more.

cooperatives is influenced by: + The cost of production (: such as: the money for buying cows, the money for cows's foods, the money for machines, farms..... The minimum price is not allowed below the cost of production if the producers want to have a profit. + The multiple buyers : If there are a lot of buyers, the price will grow up and vice versa. For example : In the assignment's situation, the price of milk was low because Milk Marque was a monopoly buyer. + The policies of Gorvernment: Sometimes, the Gorvernment can have an effect on the market to set up the balance and the fair for the market. For example, in the assignment's situation, the milk market was deregulated by the gorvenment so the milk prices increased . + The conditions of nature : such as drought, flood, hearquake..... affect to the production and make a scarcity of milk products that increase the price of liquid milk. At the stage 2: The price that the cooperative sells to its processors is influenced by. + The power of the cooperative: If the cooperative takes a large possession of the milk quantity of the market, it can sell milk for the processors at the higher price than normal. ...read more.

2.3 The differences are the splitting up of Milk Marque likely to make to the marketplace: Before splitting up After splitting up - Milk Marque had a monopoly over supply with control over 65 percent of suppliers. So they could easily push for higher prices in the interests of its members.The market is divided into two parts : a large part ( Milk Marque cooperative ) and a small part ( other suppliers ). - There was only Milk Marque's brand in the market in that time. And they only concentrated in supplying liquid milk for retail and for doorstep. - No one has a monopoly over supply. The price of milk must follow to the consumers' demand and competitors' prices. The market is divided into more parts: Express Dairies ( 30 per cent market share), Daity Crest( 25 percent), MD foods ( 12 percent), Robet Wiseman( 12 percent) and others ( 21 percent ). There are at least 4 different brands. And each brand has its different way to improve its products and its brand. The processorsturned the milk into the full range of dairy products, including fresh milk, cheese, yogurt, desserts, butter and bulk food ingredients. ( For example: Dairy Crest, owns Frijj, a range of flavoured milk.MD foods has launched Cravendale PurFiltre which stay fresh in the fridge for seven days after it is opened and for almost three weeks upopened. ...read more.