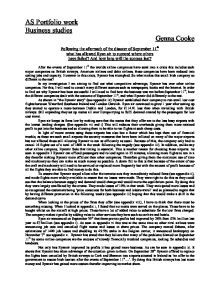 Following the aftermath of the disaster of September 11th what has allowed Ryan air to succeed where others have failed? And how long will the success last?

AS Portfolio work Business studies Genna Cooke Following the aftermath of the disaster of September 11th what has allowed Ryan air to succeed where others have failed? And how long will the success last? After the events of September 11th the worlds airline companies have sunk into a crisis this includes such major companies as British airways, American airlines and delta airlines, these companies have been reduced into cutting jobs and capacity. However in this crisis, Ryanair has triumphed. So what makes this small Irish company so different to the rest? In my investigation I am aiming to find out what competitive advantage, Ryanair has over other airline companies. For this, I will need to consult many different sources such as newspapers, books and the Internet. In order to find out why Ryanair has been successful I will need to find how the business was run before September 11th, how the different companies dealt with the outcome of September 11th, and what Ryanair did differently to the rest. As shown in "the Ryanair story" (see appendix ix) ...read more.

To ensure that Ryanair stayed afloat after the terrorist acts they immediately reduced fares (see appendix ii), and made flights more widely available to ensure that no losses were made. They were right to do this as they could see that the balance between supply and demand would change and would move the equilibrium point. By doing this they were largely unaffected by the events. They made losses of 10% in that week. They anticipated more losses and so recognised the customers being 'price conscious for both business and leisure travel' and so planned to regain that by having different promotion in the following weeks (see appendix iii) hoping that this would make a shift in the demand curve. When looking at the prices of the fares they offer (see appendix viii), I have to think that there must be something missing. When I looked at appendix i, I found that no meals were served on the planes. These have to be bought whilst on the aircraft at high prices. These have a lot of added value to substitute for the low fares charged. ...read more.

Even more publicity has been given to them after there campaigns such as there 'keep Belgium flying' campaign (see appendix iv) and its keep Britain flying Champaign (see appendix v) However, the big question is will Ryanair keep up its success? I believe that after looking at the research I gathered that they will. Ryanair have planned whether it is good or bad. Their share price has risen by a great deal according to appendix i and is said to be going to increase by mass amounts. They are set to take advantage of future offers such as Swiss airports are begging for their business (see appendix i). In addition, according to appendix iii they are looking to seize opportunities to invest in some new aircraft that failing companies will be selling to manage their debt. In my opinion, their low fare flights are their main source of competitive advantage. No other airlines have been able to beat their prices. They have thought of a strategy that no one else has. Their slogan "low fares/no frills" has brought them a lot of custom. And by using the cheapest airports and their "no frills" slogan it is possible for them to give customers such low fares. ...read more.