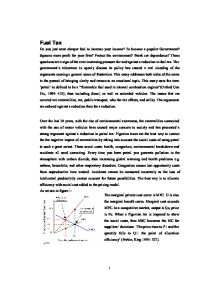 Fuel Tax Do you just want cheaper fuel to increase your income? To become a popular Government? Squeeze more profit for your firm? Protect the environment? Break car dependence? These questions are a sign of the ever-increasing pressure for and against a reduction in fuel tax. The government's reluctance to openly discuss its policy has caused a real clouding of the arguments causing a general sense of frustration. This essay addresses both sides of the arena in the pursuit of bringing clarity and reason to an emotional topic. This essay uses the term 'petrol' as defined to be a "flammable fuel used in internal combustion engines"(Oxford Con Dic, 1989: 425), thus including diesel, as well as unleaded vehicles. The issues that are covered are externalities, tax, public transport, who the tax effects, and utility. The arguments are ordered against a reduction then for a reduction. Over the last 30 years, with the rise of environmental awareness, the externalities connected with the use of motor vehicles have caused major concern to society and has presented a strong argument against a reduction in petrol tax. Pigovian taxes are the best way to correct for the negative impact of externalities by taking into account the social costs of using petrol to such a great extent. These social costs: health, congestion, environmental breakdown and accidents all need correcting. Every time you burn petrol you generate pollution in the atmosphere with carbon dioxide, thus increasing global warming and health problems e.g. ...read more.

'Six pence on all road fuel duties raises as much money as one penny on the basic rate of income tax' (HM Treasury 44: 1999). The suppliers and the government are seen to raise huge amounts of revenue from highly taxed petrol. In response to the argument for a reduction in petrol tax as the large amounts of revenue generate seem excessive and appear to be public and private profiteering. With the revenue being re-invested in infrastructure as the government is committed to doing. In the Chancellors Pre-Budget Speech in November 1999, '...[we] are now in a position - instead of the pre-announced 6 per cent escalator-to make our decisions Budget by Budget with the following commitment: if there are any real term rises in road fuel duties, the revenues will go straight to a ring-fenced fund for the modernisation of roads and public transport' (Smith, 2000; 8) These pledged billions give the vehicle user a real choice. The need to break car dependency and shift back the demand curve back instead of a taxing shift along the demand curve will reduce drivers by more. See figure 2: The option of substitute transport will make the driver fell they do have a choice to private vehicles. Investment of the revenue from petrol tax is a great asset. Much more than the revenue from the mandatory car tax gives. ...read more.

This is a problem in a homogeneous market with few firms, indicative of the markets for natural resources. Although petrol users are also trying to increase their position by fuel tax being reduced. The Government are looking after all interests. These three groups are all willing to maximise their utility. As well as income utility there is utility 'as a quantitative measure of psychological satisfaction' (Etrzioni, Lawrence, 1991: 86) present. The chance of promotion from making more profits, getting something cheaper, or covering short falls in other public services are all difficult to value in financial terms. The inter conflict of interest will not allow for mutually beneficial trade. Rational self-interest depends in which of these groups you are, and to the same extent if you think this is an argument for or against a petrol tax reduction. In conclusion, we have seen that the taxes on petrol are in place to correct externalities by bringing adding social costs to show the real cost of vehicle use. This in turn has shown the petrol market to be one of high taxation with its inelastic nature. The revenue generated would regenerate the public transport sector to allow for alternative travel, although governments have failed to deliver. Tax affects vehicle users who need a substitute for car travel the most. And finally we saw utility maximisation pulling the debate in all directions. Tax reduction maybe a personal issue but there are rational arguments which need addressing to come to a solution in the best interests of society. ...read more.